Who is Responsible for the War? 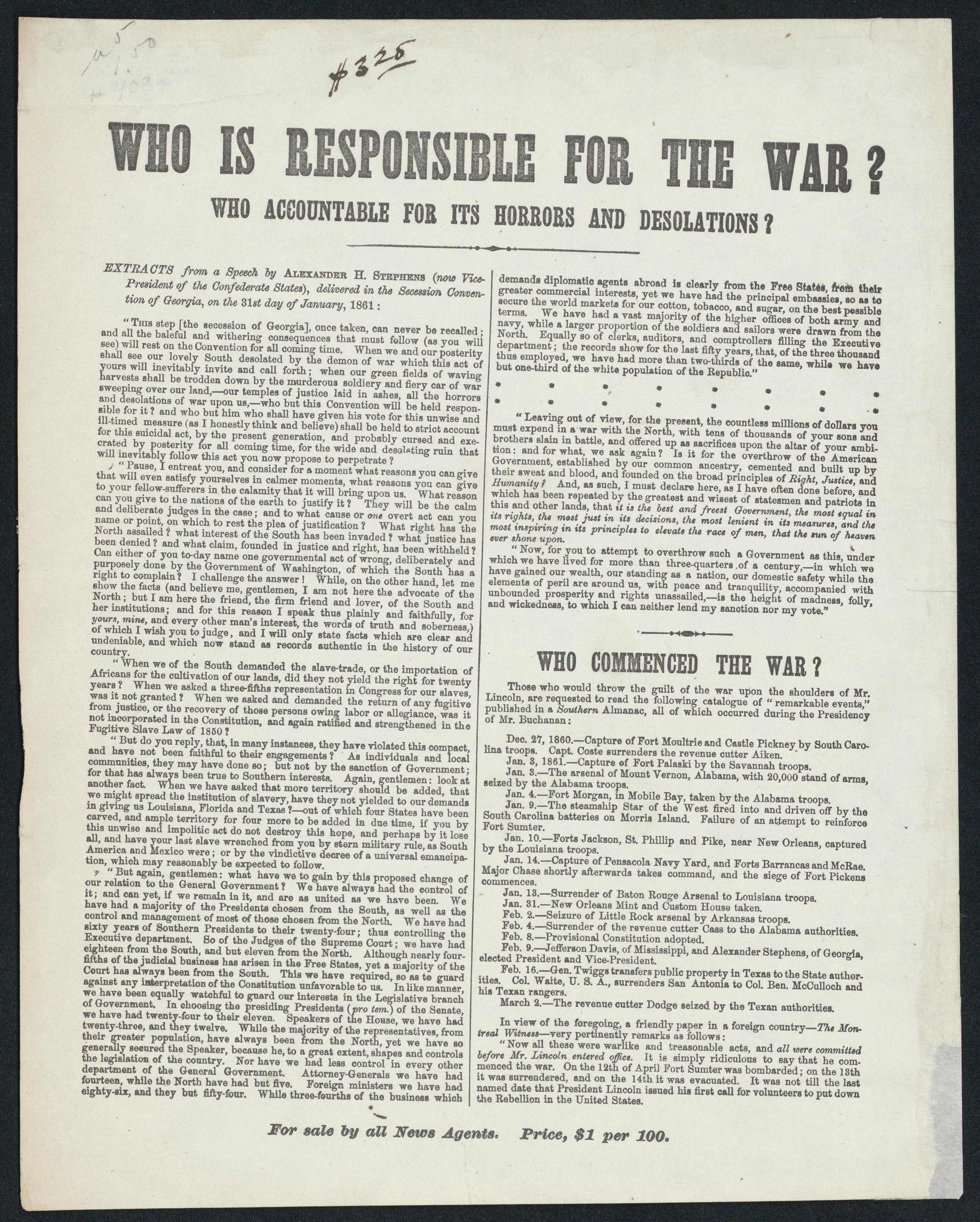 WHO IS RESPONSIBLE FOR THE WAR?

WHO ACCOUNTABLE FOR ITS HORRORS AND DESOLATIONS?

EXTRACTS from a Speech by ALEXANDER H. STEPHENS (now Vice-President of the Confederate States), delivered in the Secession Convention of Georgia, on the 31st day of January, 1861:

“THIS step [the secession of Georgia], once taken, can never be recalled; and all the baleful and withering consequences that must follow (as you will see) will rest on the Convention for all coming time. When we and our posterity shall see our lovely South desolated by the demon of war which this act of yours will inevitably invite and call forth; when our green fields of waving harvests shall be trodden down by the murderous soldiery and fiery car of war sweeping over our land,—our temples of justice laid in ashes, all the horrors and desolations of war upon us,—who but this Convention will be held responsible for it? and who but him who shall have given his vote for this unwise and ill-timed measure (as I honestly think and believe) shall be held to strict account for this suicidal act, by the present generation, and probably cursed and execrated by posterity for all coming time, for the wide and desolating ruin that will inevitably follow this act you now propose to perpetrate?

“Pause, I entreat you, and consider for a moment what reasons you can give that will even satisfy yourselves in calmer moments, what reasons you can give to your fellow-sufferers in the calamity that it will bring upon us. What reason can you give to the nations of the earth to justify it? They will be the calm and deliberate judges in the case; and to what cause or one overt act can you name or point, on which to rest the plea of justification? What right has the North assailed? what interest of the South has been invaded? what justice has been denied? and what claim, founded in justice and right, has been withheld? Can either of you to-day name one governmental act of wrong, deliberately and purposely done by the Government of Washington, of which the South has a right to complain? I challenge the answer! While, on the other hand, let me show the facts (and believe me, gentlemen, I am not here the advocate of the North; but I am here the friend, the firm friend and lover, of the South and her institutions; and for this reason I speak thus plainly and faithfully, for yours, mine, and every other man’s interest, the words of truth and soberness,) of which I wish you to judge, and I will only state facts which are clear and undeniable, and which now stand as records authentic in the history of our country.

“When we of the South demanded the slave-trade, or the importation of Africans for the cultivation of our lands, did they not yield the right for twenty years? When we asked a three-fifths representation in Congress for our slaves, was it not granted? When we asked and demanded the return of any fugitive from justice, or the recovery of those persons owing labor or allegiance, was it not incorporated in the Constitution, and again ratified and strengthened in the Fugitive Slave Law of 1850?

“But do you reply, that, in many instances, they have violated this compact, and have not been faithful to their engagements? As individuals and local communities, they may have done so; but not by the sanction of Government; for that has always been true to Southern interests. Again, gentlemen: look at another fact. When we have asked that more territory should be added, that we might spread the institution of slavery, have they not yielded to our demands in giving us Louisiana, Florida and Texas?—out of which four States have been carved, and ample territory for four more to be added in due time, if you by this unwise and impolitic act do not destroy this hope, and perhaps by it lose all, and have your last slave wrenched from you by stern military rule, as South America and Mexico were; or by the vindictive decree of a universal emancipation, which may reasonably be expected to follow.

“But again, gentlemen: what have we to gain by this proposed change of our relation to the General Government? We have always had the control of it; and can yet, if we remain in it, and are as united as we have been. We have had a majority of the Presidents chosen from the South, as well as the control and management of most of those chosen from the North. We have had sixty years of Southern Presidents to their twenty-four; thus controlling the Executive department. So of the Judges of the Supreme Court; we have had eighteen from the South, and but eleven from the North. Although nearly four-fifths of the judicial business has arisen in the Free States, yet a majority of the Court has always been from the South. This we have required, so as to guard against any interpretation of the Constitution unfavorable to us. In like manner, we have been equally watchful to guard our interests in the Legislative branch of Government. In choosing the presiding Presidents (pro tem.) of the Senate, we have had twenty-four to their eleven. Speakers of the House, we have had twenty-three, and they twelve. While the majority of the representatives, from their greater population, have always been from the North, yet we have so generally secured the Speaker, because he, to a great extent, shapes and controls the legislation of the country. Nor have we had less control in every other department of the General Government. Attorney-Generals we have had fourteen, while the North have had but five. Foreign ministers we have had eighty-six, and they but fifty-four. While three-fourths of the business which demands diplomatic agents abroad is clearly from the Free States, from their greater commercial interests, yet we have had the principal embassies, so as to secure the world markets for our cotton, tobacco, and sugar, on the best possible terms. We have had a vast majority of the higher offices of both army and navy, while a larger proportion of the soldiers and sailors were drawn from the North. Equally so of clerks, auditors, and comptrollers filling the Executive department; the records show for the last fifty years, that, of the three thousand thus employed, we have had more than two-thirds of the same, while we have but one-third of the white population of the Republic.”

“Leaving out of view, for the present, the countless millions of dollars you must expend in a war with the North, with tens of thousands of your sons and brothers slain in battle, and offered up as sacrifices upon the altar of your ambition: and for what, we ask again? Is it for the overthrow of the American Government, established by our common ancestry, cemented and built up by their sweat and blood, and founded on the broad principles of Right, Justice, and Humanity? And, as such, I must declare here, as I have often done before, and which has been repeated by the greatest and wisest of statesmen and patriots in this and other lands, that it is the best and freest Government, the most equal in its rights, the most just in its decisions, the most lenient in its measures, and the most inspiring in its principles to elevate the race of men, that the sun of heaven ever shone upon.

“Now, for you to attempt to overthrow such a Government as this, under which we have lived for more than three-quarters of a century,—in which we have gained our wealth, our standing as a nation, our domestic safety while the elements of peril are around us, with peace and tranquility, accompanied with unbounded prosperity and rights unassailed,—is the height of madness, folly, and wickedness, to which I can neither lend my sanction nor my vote.”

Source
This text is in the public domain. Retrieved from https://www.loc.gov/item/scsm000224/.
Text Dependent Questions
Reveal Answers
Teach This in a Learning Plan
X
Add to an Existing Learning Plan
START A NEW LEARNING PLAN
Print