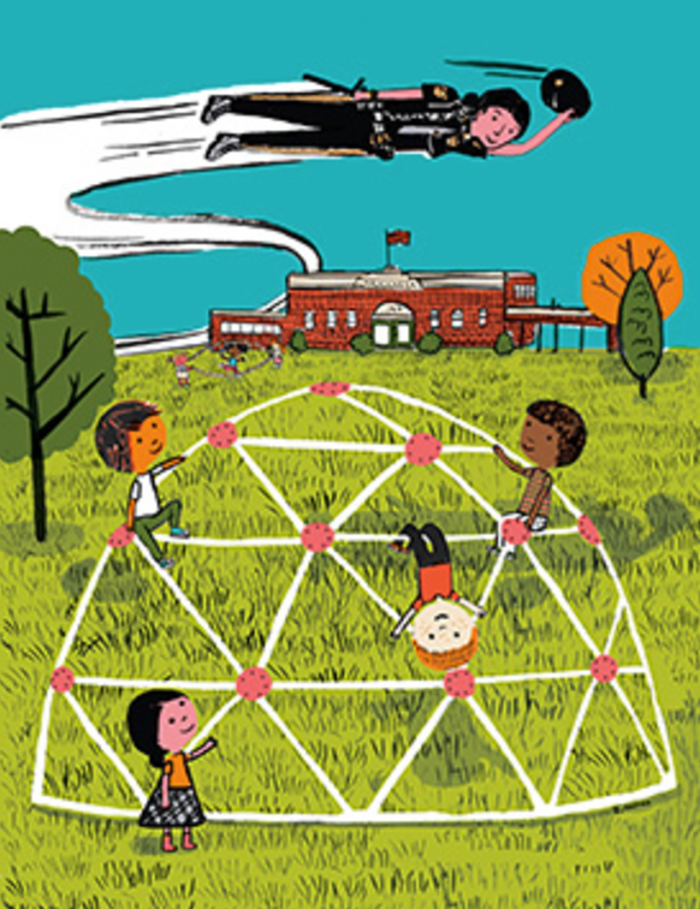 The bell rang for recess, and the children lined up to go outside. Mrs. Miller led them to the playground gates and they scattered, breaking off into groups. There were groups of girls preparing for Double Dutch, hopscotch and a tea party. The boys played dodge ball, ran races and played superhero.

Sheila stood at the gate, trying to decide which game she wanted to play. She didn’t like tea party or hopscotch and couldn’t Double Dutch. She decided to join some of the boys. She walked over to John, who lived next door to her. They played superhero together all the time.

“John, can I play superhero with you guys?” she asked.

“Superhero is for boys,” John said. “Why don’t you go play a girl’s game?”

“But you and I play it all the time, John!” Sheila said in surprise. “Please, may I play?”

Sadly, Sheila walked away and sat on the bench by herself. That evening at dinner, instead of eating, Sheila pushed her peas around her plate with her fork.

“Today at recess, I asked John if I could play. But he told me that superhero is for boys and that I should go play a girl’s game,” Sheila explained. “Daddy, can’t girls be superheroes, too?”

“Of course they can,” her father agreed. “Lots of superheroes are girls and women. Your mom is a superhero.”

“I sure am,” Sheila’s mom replied. “I save lives every day.”

“Cool!” Sheila shouted. “I wish you could tell the boys at school that girls can be superheroes, too.”

“Maybe I can,” Sheila’s mom said with a wink.

Sheila woke up the next day eager to get to school. She was going to tell John and all the other boys about her superhero mom. They would have to let her play with them then. She sat through class, waiting for recess. When the class got to the playground, Sheila walked proudly to the jungle gym, where the boys were playing.

“John, may I play superhero with y’all today?” she asked.

“Why don’t you go play a girl’s game?” John said, just like he had the day before.

“Superhero is a girl’s game,” Sheila said with a smile. “My mom is a real-life superhero. She saves lives every day!”

“Your mom isn’t a superhero. She doesn’t have a cape or a mask,” John said.

“My mom has a costume. She’s a police officer,” Sheila replied, “and my dad cooks and plays dolls with me. So I don’t think there are such things as boys’ games and girls’ games.”

Seeing the children getting heated, Mrs. Miller walked over to the jungle gym.

“I have a surprise for everyone,” she said, breaking up the argument. “Let’s go inside.”

The children frowned, sad about recess ending early but curious about the surprise. When they were all settled in their seats, Mrs. Miller stood in front of the class.

“Over the last couple of days, I have heard some quarrels about girls’ games and boys’ games. So today we have some guests to talk to you about it.”

Mrs. Miller motioned toward the door. In walked Sheila’s mom wearing her police uniform and a man wearing medical scrubs.

“Mrs. Johnson is a police officer and my husband, Mr. Miller, is a nurse,” she explained. “They’ve agreed to come in and talk to you today about what they do.”

John raised his hand and said, “Mrs. Johnson, being a police officer isn’t safe. Girls should leave that kind of stuff for boys. We’re stronger and tougher.”

“Well, John,” Mrs. Johnson said, “you’re right that being a police officer is dangerous, but they train us to be safe. And that training can apply to anyone who is brave and committed to helping the community.”

She smiled at her daughter. Another student, Ashley, raised her hand. “Mr. Miller, my dad said boys are supposed to be doctors, not nurses. Didn’t you want to be a doctor?”

“I am happy to say, changes happened so that boys and girls, like you, can decide what they want to be,” Mr. Miller explained. “I chose to be a nurse because I get to work closely with patients. Do you know that nurses actually save more lives than doctors do every day?”

More hands were raised with questions. After the Q&A session, Mrs. Miller made an announcement. “Now, we are going to go back outside, and you will each get to learn about becoming a nurse and a police officer. Mrs. Johnson and Mr. Miller will train you. And we’ll need some volunteers to help us. Sheila, will you help?”

“Yes, ma’am,” Sheila said, and as she walked to the front of the classroom, she smiled to herself. “I knew girls could be superheroes."