Fighting Back Against Bullies

This Film Is Based on a True Story 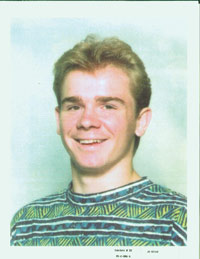 Jamie Nabozny carefully planned his every move at school. He had to. The bullying by his classmates in Ashland, Wisconsin, was unrelenting.

The attacks began in middle school. Jamie knew he was gay and had told his family, but hadn’t come out to friends and classmates. It didn’t matter; his classmates saw him as gay. At first, the bullies called him names. That progressed to tripping and shoving, and then to kicks and punches. They ganged up on him in the restroom. Jamie was once kicked so hard that he had to go to the hospital.

Jamie adapted as best he could. Before the first class bell rang, he was already mapping out his day. Jamie got to school early to miss the rush and took refuge in quiet corners. He used hall passes to avoid crowded class changes. And he looked for out-of-the way restrooms where he wouldn’t be attacked. Only after other students left school would Jamie finally make his way home.

“I spent a lot of time thinking defensively, which is a strange thing to have to do at school,” said Jamie, who is now in his mid-30s. “Looking back, I feel like I tried to be numb as much as possible to not feel what was happening.”

Jamie reported the abuse to teachers and administrators, but they did little to stop the bullies. A middle school administrator told Jamie he should expect to be bullied if he was going to be gay. A high school official asked him what he did to cause the attacks.

Nabozny’s story is told in the new Teaching Tolerance film Bullied: A Student, a School and a Case that Made History. The documentary shows how Nabozny courageously stood up for his rights. He filed a lawsuit against the district and school officials. His suit led to an important court decision that public school officials had to protect all students from bullies, even those who are lesbian, gay, bisexual or transgender (LGBT).

The Bullied viewer’s guide that comes in the film kit includes professional development activities and guidance for school leaders as well as classroom lessons. While most schools and educators will act promptly when faced with bullying based on race, religion or ethnicity, many are less likely to confront harassment based on sexual orientation. The Bullied guide provides guidance in a series of answers to the questions educators who use the kit may be asked by their colleagues, members of the community or parents.

The guide addresses these important issues:

Login to join the conversation
This film would be good for educating teachers/admin and older teenagers but is not appropriate for tweens. The film dramatizes Jamie (a gay boy) getting attacked in his classroom, hallways, and school bathroom; he is kicked in the ribs to the point of needing surgery and 5 days of hospitalization; he is peed on; harassed daily, and called every awful name imaginable; he tries to commit suicide and runs away from home twice.

Much of the screen time is devote to portraying this harassment. The effect this had on my 10yo, who saw it in school in 5th grade, was to make him terrified of middle school, of the possibility of being gay, or of having friends who are gay and experiencing similar torture. That fear — and the fact that the bullies are enabled and never punished in the movie — overwhelmed the message about Jamie winning a court case and $900,000 as an adult many years later.

With any media, it is CRUCIAL for educators to consider that the *intended* message is often not the interpretation children take away. Some messages a child could reasonably take away from this story: don’t be gay or this could happen to you; don’t hang out with gay people or this could happen to you; homosexuality and bullying go together; middle school is scary and adults may not help you when you need it.

As an adult, I enjoyed this movie and Jamie’s story. It’s important message — but not suitable for general tween audiences.
Bookmark This PageSave