Helping the Homeless In School and Out

Homeless kids can be hard to identify and even harder to help. But teachers can do a great deal to make sure that they don’t fall through the cracks.
Helena Holgersson-Shorter
Issue 38, Fall 2010
Illustration by Scott Bakal
Teach This in a Learning Plan
X
Add to an Existing Learning Plan
START A NEW LEARNING PLAN
Bookmark Helping the Homeless In School and Out
Print 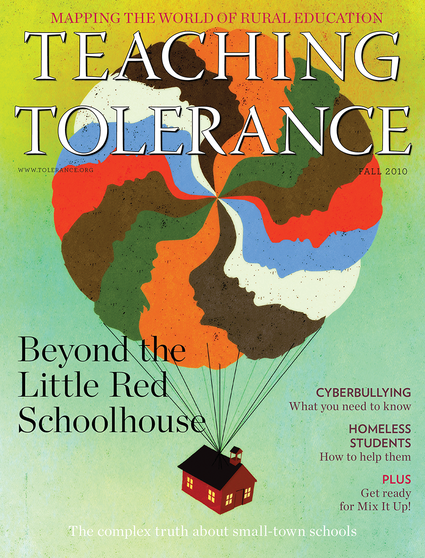 It did not take long for John Heegard to put the clues together. Valencia McMurray was one of the most promising students in his Advanced Placement U.S. History class at North High School in Minneapolis. But the junior was missing three, four, five days in a row, often just showing up to pass an exam—no small feat, considering the legendary toughness of Heegard’s tests.

Heegard tried but was unable to reach Valencia or her family to check if she was okay. When she did show, he noted her usual wit and intellect were often muted by depression. “It was evident something was up,” Heegard says. “When a kid’s that bright, it doesn’t take long to figure out they’re having some kind of trouble.”

Finally, he asked to see her after class and asked what was going on.

A veteran teacher of more than 20 years, Heegard knew better, and he had laid the groundwork with Valencia and his other students to get past the “nothings.” North Minneapolis is a community stressed by unemployment and poverty, where youth are forced to grow up fast and wary. “The way I look at it, my job is to build relationships, get to know my kids. I have to be honest, open, and treat them like young adults, which is what they are. Valencia and I already had a relationship, so the trust level was at a place where she could trust me.”

Now he reminded her how much potential she had. He laid out a vision that if she could stay on track and focus on her education through senior year, her chances of earning a college scholarship were better than good.

Valencia lowered her guard. She revealed she was homeless, and had been bouncing from living space to living space since sophomore year.

Heegard and Valencia went to work connecting her to the resources she needed.

Hard Times for Many Families

However much the recession might be receding, the effects remain deep and cruel to families living in poverty. Many have fallen through their communities’ social safety nets. Today, families with young children comprise 41 percent of the nation’s homeless population. According to the Institute of Children and Poverty, more than 1.35 million kids in the United States are homeless. And most experts in the field figure that the true number is far greater. This does not count the indefinite number of families living on the edge of foreclosure and eviction.

Not surprisingly, teachers and schools are on the front lines in meeting the substantial needs of students who have no home to truly call their own. In Valencia McMurray’s case, she had the moxie, the tuned-in teacher and the available resources to regain her footing. Many schools and teachers, though, are underprepared to deal with the urgent and unique psychological, emotional and educational demands of this growing number of “highly mobile” students.

Yet teachers in most school districts—rural, urban or suburban—are finding themselves scrambling to teach and care for these students in their classrooms. The National Association for the Education of Homeless Children and Youth (NAEHCY) reports that half the states saw a collective 50 percent jump in homeless students between the 2006-2007 and 2008-2009 school years. Even as they deal with drastic budget cuts, districts and communities are struggling to address the wider needs of homeless families.

The Compounded Stress of Homelessness

Homelessness may conjure images of cardboard boxes, sleeping bags and heating grates. The realities are more complex. By federal definition, the term “homeless child and youth” includes minors living in shelters with or without family, doubling up with friends or extended family, settling into motels, campgrounds, trailer parks or using vehicles for overnight shelter.

The strain on families as they face declining fortunes can be soul-draining. Survival needs such as food, safety and shelter become daily struggles. The stress is often compounded by other factors. Single mothers head 84 percent of homeless families, for example, and over half of these women are homeless due to domestic violence, according to the National Resource and Training Center on Homelessness and Mental Illness. In many cases, depression and substance abuse add to the emotional and psychological burdens.

For kids, the impact of homelessness or frequent dislocation is nothing less than traumatic, says Sarah Benjamin, education advocate for the Board of Cooperative Educational Services in Eastern Suffolk County, New York. “And traumatized people, or people who are under stress, are not thinking with the cognitive part of their brains, but are thinking more with the survival part: fight, flight, or freeze,” she says.

These instincts may aid survival in a life of hard knocks, but they are counterproductive in the classroom and schoolyard. Homeless kids can be distracted by many things: hunger, shabby clothing, lack of school supplies or constant anxiety about their family’s security. Studies indicate that children whose address has been in flux for more than a year are subject to developmental delays at four times the rate of their peers, are twice as likely to repeat a grade and are identified with learning disabilities twice as often. Withdrawn or disruptive behavior in the classroom can also be natural reactions to a family life riddled with uncertainty.

Laws are on the books to support students experiencing homelessness, most notably the McKinney-Vento Education for Homeless Children Act. Renewed in 2002 as part of No Child Left Behind, McKinney-Vento allows students to enroll immediately in school without proof of residency or other paperwork. School districts must provide transportation so that highly mobile students can stay in the same school—a place of familiar faces and constancy in a shifting personal landscape. Federal law also mandates that states have coordinators of homeless services, and that each district must provide a homeless liaison charged with connecting families to appropriate social and educational services.

Family reluctance may throw up barriers that deter homeless kids from seeking assistance, however. “Children want to share with [teachers] what’s going on, but oftentimes you’ll have to ask the questions,” explains Bilal Muhammad, director of the Newark Public Schools Homeless Unit in Newark, New Jersey. “One reason for this is because parents instruct them not to tell anyone they’re in a shelter or doubled-up situation because of their fear the child will be transferred out of the school.” Also, homeless parents often worry that social services might take away their children.

McKinney-Vento, though, is terribly underfunded, with $65.4 million allocated for the entire country. “This is only enough to serve nine percent of all the districts in the country, while the need is far, far greater,” says Barbara Duffield, policy director of NAEHCY.

As a rule, major U.S. cities have more experience and are better prepared than rural or suburban communities to address the needs of their homeless citizens. In New Jersey, for example, the Newark Public Schools Homeless Unit distributes packets of information about the rights of homeless families, as well as comprehensive lists of resources such as shelters, health care services, food pantries and advocacy support through the state’s Department of Social Services.

In contrast, many non-metropolitan communities are struggling to come to grips with poverty and homelessness the likes of which they have never faced. “By 2008, suburbs were home to the largest and fastest-growing poor population in the country,” the Brookings Institution reported recently. Suburbs now account for almost one-third of the nation’s poor.

Teachers and Schools on the Front Lines

Ultimately, teachers and schools are the most common resources available to homeless kids. “School is the most important thing in [these kids’] lives: it’s where they’re safe,” says Sarah Benjamin. Teachers of highly mobile students must develop the skills to make these children and youth feel welcome while quickly weaving them into classroom routines. They must rapidly assess new students’ abilities, recognize emotional needs, employ a variety of teaching strategies, arrange for students to complete homework at school, and provide individual or group tutoring. They must also routinely play the role of social worker and match highly mobile students and their families with additional resources.

In some areas, outreach programs help fill the gaps. In addition to her work with Suffolk County, Sarah Benjamin runs the Mobile Outreach Parent-Child Program. Through that grant-funded program, she and other tutors bring their talents directly to temporary living situations to offer literacy instruction for homeless children. They also connect families with various support programs.

Brooklyn, 10, has been one of Benjamin’s students through the outreach program. But Benjamin has also become a kind of mentor to Brooklyn’s mom, Delilah. “What helped me to stick with [the Mobile Parent-Child Program] was all [Sarah],” Delilah says. “No matter if I was going through something terrible and didn’t feel like having company, she was very understanding but very persistent. … Eventually that wall that you have begins to open up, and now she’s one of my biggest strengths.” Brooklyn has moved up academically to the honor roll of her Long Island school, Delilah has found work and their family has moved into a real home.

Providing an atmosphere where the child feels safe and nurtured is the most critical thing teachers can do to ease the social alienation resulting from high mobility. Effective teachers establish relationships and trust with homeless students whose belief in themselves and the future may be stunted or badly shaken. “The goal of teaching highly mobile children is not to ensure they pass the state assessment,” says Dr. Patricia Popp, coordinator of homeless education for the state of Virginia. “It’s about building a connection so that children have something to take with them when they move on.”

Such a connection between Valencia McMurray and John Heegard got the North High junior back on track. With the help of a school social worker, she was soon living at The Bridge, an emergency shelter for homeless youth. “One of the greatest places ever—as far as shelters go,” says Valencia.

“At that point, the smart, witty kid I knew was back,” Heegard says.

And she got that college scholarship—four years at Augsburg College, including room and board.