The fourth statement is the outlier in this series, and it’s wrapped up in a culture war that pits religious freedom against individual rights. This war is being fought very publically, and it has implications for students and teachers.

Tensions between advocates for religious rights and advocates for LGBT equality have existed for years, but in the wake of LGBT-rights victories culminating in the U.S. Supreme Court’s 2015 Obergefell v. Hodges ruling, these tensions have mounted significantly. The Court’s decision in Obergefell held that same-sex couples nationwide have a constitutional right to marry. Many Americans see the ruling as a watershed moment in the struggle for equality; others consider it a violation of their faith and fear that their free-exercise rights will be trampled on. In the legislative and legal arenas, resistance to LGBT rights, including marriage equality, has come under the umbrella of so-called “religious refusals.”

This divide has all the makings of a classic social studies dilemma: competing rights and values, how change often meets resistance, and how the legislative and legal systems can be used to advance and thwart social movements. Social studies teachers are uniquely positioned to put these topics into context for students.

Charles C. Haynes, vice president of the Newseum Institute and executive director of the Religious Freedom Center, says, “Part of the challenge is to find the right place in the curriculum to teach about these issues. … [B]ut I would say that every government teacher has a wonderful opportunity to address what is arguably the defining issue of our times. That is, how are we going to live with our deep differences in the United States? And to address that issue in our diverse communities, our diverse classrooms, we need to tackle how religion is treated in our public sphere and our communities.”

The on-the-ground realities of religious freedom, Haynes says, need to be a salient part of the story told in classrooms. Why? Religious diversity—and the freedom of religion—is a pragmatic lesson in U.S. history.

Haynes cautions against starting with today’s debate; students may simply shout past one another. “Whether it’s a government teacher or, in the earlier grades, a civics teacher or in a history classroom,” Haynes says, “the most important strategy is to start with our historic struggle to live up to the principles in the First Amendment.” But this story begins well before the ratification of the Bill of Rights in 1791.

Teachers can, for example, discuss Roger Williams—who founded the first Baptist church in America even as he was a proponent of religious freedom—and why he founded Rhode Island as the first society where freedom of conscience was protected. Williams certainly did not see all religions as true, but believed that any union between church and state corrupted both.

Or teachers can bring up the Virginia General Assembly, which, in 1786, became the first legislature in the world to disestablish religion when it passed the Virginia Statute for Religious Freedom, written by Thomas Jefferson. Supported by Baptists, Presbyterians and Quakers—dissenters from the state-supported Anglican Church—the statute protected all religious minorities, including Catholics and Jews.

The number of "anti-LGBT religious refusal" bills considered by state legislatures so far in 2015.

The First Amendment notably states that “Congress shall make no law respecting an establishment of religion, or prohibiting the free exercise thereof.” In U.S. history, religious freedom began as a right to practice and has emerged as an inalienable right to protect claims of conscience. Haynes says, “Most public school teachers today don’t use the word conscience, don’t define it, don’t help students understand it, but yet it is at the heart of who we are as a country.” However, although liberty of conscience is both valued and protected, it is far from absolute.

To illustrate how the lines that demarcate religious freedom have shifted over time, teachers can point to landmark cases. In 1878, the Supreme Court ruled in Reynolds v. United States that religious belief cannot be used as a defense in a criminal act—in this case, bigamy. Citing Thomas Jefferson, the Court made the distinction between belief, which is inviolable, and actions, which governments have the power to restrict. Famously, the Reynolds ruling noted that the First Amendment would not protect the practice of human sacrifice, even if it were part of someone’s religious beliefs.

In 1963, Sherbert v. Verner shifted the line again. Adeil Sherbert, a Seventh-day Adventist in South Carolina, was fired for refusing to work on a Saturday—her Sabbath—and denied unemployment insurance by the state. The Supreme Court ruled in her favor, establishing what is known as the “Sherbert test.” Under this test, a person holding sincere religious beliefs is protected from government action that substantially burdens the exercise of her beliefs unless the state can show a “compelling interest” in limiting that freedom.

“That doesn’t mean the religious claim wins automatically,” Haynes says. “It just means that we take it seriously.” 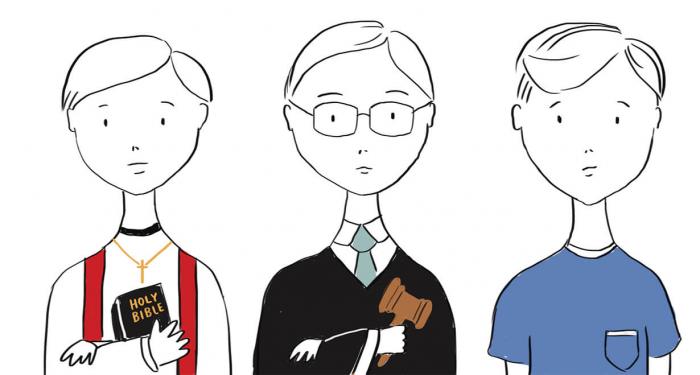 Once the historical backdrop is established, teachers can turn to today’s debates over whether one person’s religious beliefs allow them to deny rights or services to another person. In 2015, state legislatures considered nearly 80 bills that amount to “anti-LGBT religious refusals,” according to the American Civil Liberties Union (ACLU).

LGBT-rights advocates, including the ACLU, view religious refusals as claims by individuals, groups or institutions to rightfully discriminate against the LGBT community in the name of religion. For religious objectors to same-sex marriage, the issue is exemption from providing services on grounds of conscience. Religious freedom restoration acts (RFRAs) represent a hot-button issue since they were the most common bills in the backlash to the marriage-
equality movement.

Teaching about RFRAs is not easy. A good starting point is the 1990 Supreme Court decision in Employment Division v. Smith. Two American Indian counselors in Oregon were fired by their private employer for ingesting peyote, an illegal hallucinogenic drug, and were denied unemployment compensation from the state. The Court ruled that the counselors did not have the constitutional right to use peyote even though it’s used in their Native American Church ceremonies.

Every government teacher has a wonderful opportunity to address what is arguably the defining issue of our times: How are we going to live with out deep differences in the United States?

The Court’s decision in that case weakened the Sherbert test. With the 1990 ruling as precedent, any generally applicable law could now be applied to religious individuals or groups even if it burdens the free exercise of their faith.

In direct response to the Employment Division decision, a wide coalition pushed for a federal law that would restore the Sherbert test. In 1993, President Bill Clinton signed this first RFRA, titled the Religious Freedom Restoration Act, into law. It holds that federal laws or rules cannot substantially burden someone’s free exercise of religion, unless there is a “compelling interest” and the government has taken the least-restrictive way to advance that interest. Since 1997, when it became clear in the City of Boerne v. Flores ruling that the RFRA only applies to federal laws and policies, a wave of state-level RFRAs have been proposed and enacted.

RFRAs are important protections for religions in the minority.“[I]f you’re a majority—like in America, if you’re Christian—there are a lot of ways your religion is already just baked into the political and social fabric,” says Kara Loewentheil, director of the Public Rights/Private Conscience Project at Columbia Law School.

So why, some 20 years after the first wave of state RFRAs, are states again seeking to pass these laws? Two factors contributed to the recent wave: the rapid gains of the marriage-equality movement and the 2014 Supreme Court decision in Burwell v. Hobby Lobby. That decision held that the owners of Hobby Lobby, a for-profit business, could deny contraceptive coverage—required under the federal Affordable Care Act—to employees because of the owners’ religious beliefs.

According to Haynes, the Hobby Lobby case was a light-bulb moment for opponents of marriage equality who saw new state-level RFRAs as a way to allow individuals and businesses to opt out of having to honor newly gained LGBT rights.

In no time, the proposed laws drew national attention. “The problem and the reason RFRAs are important to pay attention to now,” Loewentheil says, “is that they are being written and lobbied for and used by people who are actually already members of a majority religion, and who actually want other people to have to follow their religion.” Critics of RFRAs argue that no one’s right to religious exercise is being threatened,  and that supporters are using the laws to deny the rights of people whose practices they find repugnant.

Indiana’s 2015 RFRA is a case in point. The state legislature passed it just months after a U.S. district court ruling made same-sex marriages legal in Indiana. The state’s RFRA specifically allowed private businesses to make religious claims; efforts to introduce an anti-discrimination amendment were voted down. To its many critics, Indiana’s RFRA, which was backed by prominent anti-LGBT groups, was a “license to discriminate.”

In the face of significant public pressure and the threat of an economic boycott from groups as diverse as the NCAA, Angie’s List and Subaru, the legislature revised the law. Critics of the revised act point out that the changes don’t go far enough because in Indiana, as in many states, anti-discrimination laws covering housing, education, employment and public accommodations do not include sexual orientation or gender identity.

The story does not end here. Religious refusals to LGBT rights—whether they are state-level RFRAs, other types of bills or court cases under existing law—will continue.

So what’s the bottom line for educators who want to teach about religious freedom and LGBT rights? Haynes offers these words of advice: “I just hope that teachers in classrooms help students understand that equality and liberty are both core principles in our country, and without both of them we’re lost. We need to teach both and to honor both.”

Publicly, the conversation around legislation like RFRAs often pits religion against rights. But that’s not the right framing. Many people of faith support social justice and equality, and might be compelled to do so from a place of faith.

Point to historical and contemporary examples.

Throughout U.S. history, communities of faith have supported and organized social justice movements. Examples are found in the abolitionist movement, the civil rights movement, the “Moral Monday” movement in North Carolina and many others.

Classroom conversations on religious refusals to rights may cause LGBT students and deeply religious students to feel vulnerable and threatened. It’s important to recognize that these emotions may emerge and to have strategies on hand to ensure your classroom is safe and inclusive for all students.

Do not tolerate harassment.

Students have the right to express their views about same-sex marriage, whether motivated by religion or not. They do not have the right to mock, insult or ridicule those who do not share their views. If needed, revise your classroom or school policies to underscore this distinction.

Integrate the history of religion freedom into your instruction with this model lesson.