If It Can Happen Here...

When election rhetoric threatened their district culture, this group of California teachers organized a “Teach In.”
Jey Ehrenhalt
Issue 54, Fall 2016
Bookmarked 6 times
Photography by Shoey Sindel
Add to a Learning Plan
X
Add to an Existing Learning Plan
START A NEW LEARNING PLAN
All articles from this issue
Print

“You should get thrown back to Mexico,” one first-grader said to another on the playground one day. “You’re gonna get deported.”

Their teacher, Tracey Iglehart, heard about the exchange.

In Berkeley, California, where Iglehart teaches, liberalism is the norm. In a town known for progressive ideas and radical political demonstrations, the anti-immigration sentiment caught her ear. “Teasing and arguments are common,” she recalls, “but using the threat of deportation as a tool of power—we haven’t seen that before.” Iglehart wondered where her students had been exposed to the anti-immigration language.

It didn’t take her long to figure it out. Shortly thereafter, Iglehart explicitly overheard students expressing fears of being deported if Donald Trump—who was a candidate in the Republican primary at the time and whose platform includes removal of undocumented immigrants—were to be elected.

Iglehart follows the Southern Poverty Law Center on Facebook and, in April 2016, saw that Teaching Tolerance published a report called The Trump Effect. The report explained that the 2016 presidential campaign rhetoric is having a negative impact on the nation’s schools (as reported by 2,000 surveyed educators). It found that this election season has produced higher levels of fear and anxiety among students of color and intensified racial tensions in schools. Many contributing teachers commented specifically that their students worried about being deported.

After reading the report, Iglehart knew she had to do something about the anti-immigration sentiment on the playground. “We’ve got Black Lives Matter posters up all over our school that the teachers’ union made and distributed,” she says. “I got an idea: What if we did something similar to that?”

Iglehart thought about who she could mobilize to help with her idea for a campaign focused on the message “We All Belong in Berkeley.” 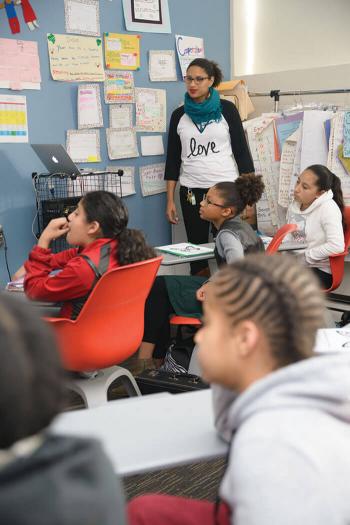 “We don’t care where you’re from,” she emphasizes. “We don’t ask your immigration status in our district. We don’t care. It’s none of our business. We all belong, and it’s not OK to say that some people don’t.”

Several years ago, the Berkeley Federation of Teachers (BFT) had formed a group called the Teachers of Color Network. Another group, the East Bay Educators, had recently formed a social justice collective to create culturally responsive curricula. Iglehart hoped that members of the Network and the Collective would join her and take a stand against the threat to their district’s culture. She called Lisa Kelly, a Network co-facilitator and Collective member, and asked her if she had read The Trump Effect. “This is happening in Berkeley,” she told Kelly. “My kids are talking about it, and they don’t know how to make sense of it. We have a lot of kids walking around scared that they’re going to get sent out of the country.” Kelly concurred. She said her students, most of whom are Latino, were also talking about “how his rhetoric impacts their lives.”

We all belong, and it’s not OK to say that some people don’t.

Iglehart proposed an idea: host a “Teach In” on April 29, the day Donald Trump would be in town. She also suggested papering the schools with posters based on the artwork of immigrant rights activist Favianna Rodriguez, who uses a butterfly as a symbol of migration. Rodriguez gave them permission to use her image. The posters would say, “We All Belong in Berkeley” in English, Spanish and Arabic.

Kelly emailed a handful of Teachers of Color Network facilitators and got some other social justice educators on board. “We did not have a single meeting,” Iglehart remembers. “Some people in the group I have never met. It was all done by email, texting and a couple of phone calls in five days.”

From their separate locations, the teachers adapted Teaching Tolerance lessons to create a curriculum guide focused on immigration, identity and inclusion. The Sunday before the Teach In, Kelly sat down at a coffee shop and assembled a Google Docs folder where teachers could access K–12 lesson plans. Their goal was to frame the conversations positively—particularly with younger children—so as not to compound any existing fears. “We wanted to send a really strong message to our students and to our community that …  it is never OK to say that some people don’t [belong] or that they will be sent away,” says Iglehart.

With the lessons assembled and the chosen date just days away, Iglehart turned to the BFT for support. The union had distributed Black Lives Matter posters throughout the district, so she hoped they would also want to help with materials for the Teach In. The president was skeptical about the fast approaching deadline, but when she learned about the planning the teachers had already accomplished, she was on board and funded printing for 1,000 butterfly posters. Iglehart and her colleague, Network member Jessica Arroyo, worked together to distribute posters to every school in the district.

In the days leading up to April 29, the participating teachers facilitated a series of classroom conversations about immigration. In Iglehart’s first-grade class, the students counted 22 countries of origin and 20 languages represented. In Kelly’s middle school classrooms, students discussed Trump’s rhetoric directly. In Arroyo’s fifth-grade classroom, they debunked myths about immigration and shared how coming to the United States influenced their lives.

The day of the Teach In arrived. Iglehart addressed her whole school, telling the students directly that they belonged there and that the day was for them. She also described how all students could become allies. “If you hear someone saying, ‘You have to leave because of where you’re from or the language you speak,’ you can speak up and say, ‘No. We all belong here,’” she told the assembled crowd.

Throughout the day, teachers all over the district taught the curated lessons, and students colored and displayed the butterfly posters. Iglehart’s first-graders, who had been discussing immigration all week, played a game of musical chairs. One student remarked, “We’re all moving around just like people moving around in the world!”

Teachers can affirm people’s identities in the classroom. The moment [students] notice that their identity is celebrated, they’re all about it.

Iglehart nudged them to go deeper. “What if someone who was left out or had gotten kicked out was asked to leave? How would that feel?” Ultimately, her students found ways to include those who had gotten out, like making room on their chairs or dancing in the middle of the circle. Every time her students included someone, Iglehart colored in a piece of the butterfly image. “At the end, our butterfly was all colored in and more beautiful,” she remembers, “much like our country when we include everyone.”

Meanwhile, in third grade, students studied their families’ immigration stories. Teachers emphasized that not everyone has an immigration story; American Indians were the original inhabitants of what is now the United States. And not everyone’s immigration story is voluntary; refugees and enslaved people were forced to leave their homelands. The educators worked with students’ families to make sure the stories touched on appropriate levels of information since many immigration experiences involved painful details.

The event unearthed a greater awareness of ancestral immigration stories, as well as buried shame about being kidnapped by slave traders or crossing borders illegally from war-torn countries. Teachers overhead students saying, “I’m so glad we’re finally talking about this.” 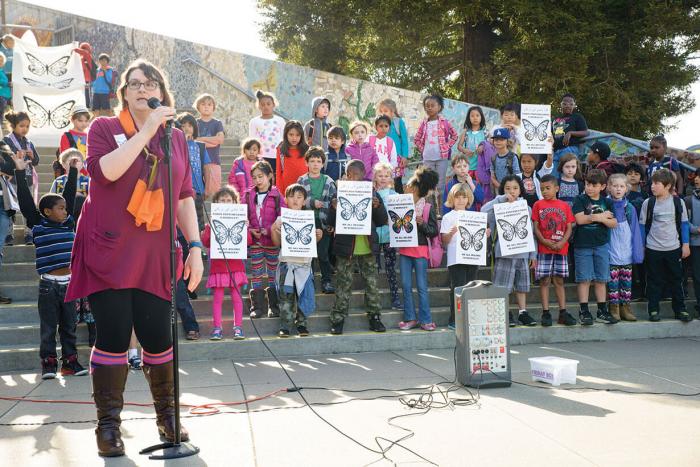 The Teach In did more than unite the children of Berkeley around a common belief; it changed the way their teachers view anti-bias education.

“When deciding whether or not to broach the subject of immigration, don’t make the mistake of thinking kids aren’t talking about these things because they are,” Iglehart advises based on the event. She points out that educators can discuss the value of a pluralistic history without promoting a particular political viewpoint.

The East Bay Educators and the Teachers of Color Network members urge adults in schools to confront immigration-based bullying immediately. “Kids wonder, ‘Who’s going to stand up for me?’” says Kelly. “They look at, ‘Who’s going to sit by and watch me be oppressed?’”

Jessica Arroyo, another Network facilitator, recommends finding allies. “When you’re that person who is always trying to be anti-imperialist in the classroom, you’re not the most popular person at school,” she says. She points to camaraderie—having “homies” doing the same work—as instrumental to success. “Link up and inspire each other,” she encourages. “Otherwise, it’s very easy not to care.”

Network teachers cite families as key components of effective action. Families are powerful, Arroyo stresses, because kids’ identities develop within that structure. She suggests connecting with parents, caregivers and relatives whenever possible. “The moment parents are asking for it, boom, we make it happen,” she says. “It has to happen … because that’s the community we serve.”

Arroyo also encourages her fellow educators not to doubt their ability to create change. “Our job as educators is to take whatever the community struggle is and teach about it,” she says. “Teachers can affirm people’s identities in the classroom. The moment [students] notice that their identity is celebrated, they’re all about it.”

The coalition of educators who participated in the Teach In plan to use their momentum to push for more positive change. Arroyo has started a Muslim family support group at her school, and the Network hopes to expand the group to sites throughout the district.  They also plan to design curricula for the 2016-17 school year that gives voice to more people of color and to use the day of action as an entry point into the work.

Although many educators collaborated to organize the Teach In, the day was primarily architected by Jessica Arroyo, Julia Beers, Monique Debrit, Tracey Iglehart, Lisa Kelly and Gloria Munoz-Hughes.

Bring the Teach In to your school with these lessons.