Toolkit for "The Book of Matthew"

Uncover the deeper meaning of Matt Shepard’s story through the lens of our best practices guide 'Civil Rights Done Right.'
Issue 60, Fall 2018
Teach This in a Learning Plan
X
Add to an Existing Learning Plan
START A NEW LEARNING PLAN
Bookmark Toolkit for "The Book of Matthew"
Print 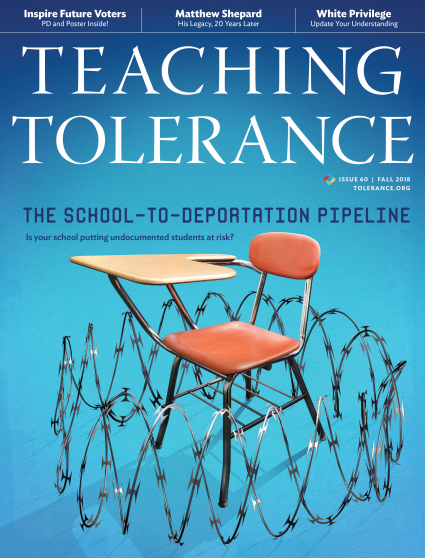 In our publication, Civil Rights Done Right, we offer suggestions for building robust, meaningful lessons about civil rights history. Those same tactics can and should be used to discuss pivotal moments in LGBTQ rights history—including the legacy of Matthew Shepard described in the feature story "The Book of Matthew."

In this toolkit, we will briefly illustrate how an educator can translate Matt Shepard’s story through the lens of our Civil Rights Done Right best practices. This practice of breaking down the key elements of his story can be repeated with students. It serves as a useful tool for understanding both the small details and big picture of a historical moment.

The overarching narrative you tell

First, consider the five essential practices in teaching civil rights, as adapted to fit stories about LGBTQ figures and events. These will inform the overarching narrative that should arise from your teaching about Matthew Shepard.

In teaching about Matthew Shepard, remember the details can be grim and disturbing for LGBTQ students and their allies. Do not teach about the hate crime without also giving examples of agency and activism that happened in its aftermath. LGBTQ students can feel inspired by queer figures and allies who fought for better laws and acceptance in the wake of Matt’s death.

2. Know how to talk about sexual orientation and queer identities.

The glossary, do’s and don’ts inside our LGBTQ Best Practices guide offer plenty of vocabulary and suggestions for talking about these topics in class.

In the case of Matthew Shepard, this means discussing aspects of his life often lost once he became the face of a movement. What were his passions? What struggles was he dealing with? And it means highlighting names and crimes that did not receive the same national attention, before and since 1998.

Matt’s story is ultimately triumphant, in its phoenix-like rise from a vicious hate crime to momentous hate crime legislation. But it’s not that simple. Matt’s parents faced legislative losses before they saw victory. Matt was not the last victim of homophobic violence. Hate crime reporting remains tainted by bias and bad processes. And the quest for LGBTQ acceptance remains ongoing and contested; in many states, people can still be fired or denied housing based on their LGBTQ identity.  A lesson on Matthew Shepard must underscore why activism still happens in his name; the story isn’t over, nor was the journey here easy.

5. Connect to the present.

As mentioned above, Matt’s story remains relevant. Make that clear to students. Underscore how things have improved. Illustrate how the tactics used by Matt’s parents and allies informed the contemporary LGBTQ rights movement. And let students draw connections to their lived experiences, wherein LGBTQ youth remain more vulnerable to violence and harassment, but also live in a context where there’s more representation and resources than there was in 1998.

Now that you have a grasp of the overall narrative you should present to students, consider the essential content areas we highlight in Civil Rights Done Right: leaders, groups, events, historical context, opposition, tactics and connections. These categories can help you streamline any lesson on civil rights events, including the story of Matthew Shepard.

This sheet can be used by you as a lesson-planning tool, or by students as a way to easily organize the key figures, causes and effects of an event.

For the Matthew Shepard story, a filled-out sheet may look like this. Take a look. What information would you find most useful in framing a lesson? Is there anything you’d add? Anything you didn’t know before? This organizational tool often helps educators (and students!) see patterns, connections and omissions in the story we’re told.

Topic: The legacy of Matthew Shepard

Historical Context: The AIDS Crisis (and loss of many people’s gay loved ones) was still a recent memory—as were the stereotypes and dangerous rhetoric used against queer victims at the time. In many states, sodomy laws were still on the books that illegalized same-sex intimacy. As it is now, many states did not have housing or job discrimination protections in place for LGBTQ people. Just two years earlier—according to Pew Research Center data, nearly two-thirds of Americans opposed marriage equality; roughly half of Americans believed homosexuality should be discouraged and had unfavorable views of gay men. There was little LGBTQ representation in pop culture. Ellen DeGeneres’s sitcom had just been canceled after Ellen came out publicly the year before. Will & Grace had only just debuted a month before Matt’s death. Young people had little else. Online communities were still in their infant stages, meaning fewer resources and less access to community for LGBTQ people. Around-the-clock news network coverage of “real life crime drama” had become a cultural staple after cases such as the O.J. Simpson murder trial and the death of JonBenet Ramsey. The racist hate crime against James Byrd Jr. had happened mere months before.

Tactics: Speaking engagements. Shepards’ personal, emotional appeals to parents, lawmakers and potential allies; a “we all know someone affected by this” strategy that would largely inform the marriage equality movement.  Training and speaking geared toward law enforcement. Lobbying and advocating for hate crime legislation. Providing education tools. Supporting The Laramie Project and other creative works that kept Matt’s story and the conversation alive. Hate crimes investigation training.

Opposition tactics included protesting publicly at Matt’s funeral; decrying hate crime legislation as unnecessary (crimes are crimes), special treatment or a potential violation of religious freedom; discrediting Matt as a martyr because of disputed facts in his story.

Connections: Compare and contrast to civil rights martyrs of past and present. Emmett Till in 1955: brutal death catalyzes a brewing movement, led by his mother’s actions. Trayvon Martin in 2012: galvanizes new generation of young activists and #BlackLivesMatter movement. Differences include: portrayal by media; Matt’s killers being convicted while Till’s and Martin’s went free.

Learn before your students learn

Aspects of this story may be unfamiliar. So, finally, fill out the resources section of the worksheet by browsing the links below. Decide which resources best supplement your understanding, and best allow you to help students draw connections between Matt’s story and your current curriculum.

This publication offers tips for creating an LGBTQ-inclusive school and classroom environment, from model bullying policies to teaching LGBTQ history to facilitating conversations about sexuality and gender.

The Matthew Shepard Foundation offers several opportunities for schools and educators to take advantage of their expertise and resources. These range from affordable speaking engagements to their guide Commemorating the Life of Matthew Shepard: Supporting LGBT Students, which includes lessons and discussion guides for telling Matt’s story. The team also offers to video conference with classrooms for Q&As or discussions.

He Continues to Make a Difference curriculum

These lessons—created by GLSEN, Candlewick Press and Leslea Newman—help educators teach about Newman’s book of poetry “October Mourning,” as well as the life and historical legacy of Matt Shepard.

This resource from the Human Rights Campaign has information on the Shepard-Byrd Act, what it took to get it passed, what can still be done at the state level to improve hate crime prevention, and reports of recent hate crime victims.

This lesson from the Anti-Defamation League—appropriate for grades 8-12—gives students an understanding of the Matthew Shepard and James Byrd Jr. Hate Crimes Prevention Act, as well as an understanding as to how hate escalated in these and other cases. The lesson also provides action steps students can take to prevent hate crimes in their communities.

The Book of Matthew

Matt Shepard died 20 years ago, but his name lives on in stories, on stage, in the law—and in the classroom.
Cory Collins
x