Mary, a Seattle-area mother, was puzzled when her 9-year-old foster son regressed dramatically soon after enrolling at the local public school. He wanted to be rocked, wear diapers and play baby games. Soon he refused to walk or attend school.

Daniel had been abused by his biological family and had mental health problems. He’d been locked in a room for hours as a small child, and sometimes an adult family member would lie on him, painfully, as a punishment. But he’d been doing relatively well when he joined Mary’s family after two years of therapeutic care.

When Daniel insisted on staying home, Mary visited the school. She learned that two male teachers had lain on 49-pound Daniel repeatedly after he’d kicked the wall of a seclusion room. He’d been punished for disrupting class and not following directions. Mary says the teachers told her, “We laid on him for half an hour at a time, and it still didn’t work!” She hadn’t been told about the seclusions or restraints. When she spent time in the classroom, she observed teachers using similar “last-resort” discipline routinely for kids who acted out.

Mary and her husband moved Daniel to a private school because they felt he was unsafe in the public school. That was four years ago. Although Daniel, now their adopted son, has done better in the private school, he still suffers great anxiety from the trauma at his prior school, “and it has been difficult for him to regain any trust for teachers,” says Mary.

Daniel’s experience at school is hardly unique. Several government and disability group investigations in the last few years have uncovered growing reports of school restraint and seclusion practices that hurt children physically or emotionally: kindergartners with broken arms and bloody noses; children duct-taped to chairs; a 13-year-old who hanged himself while unattended after prolonged confinement in a seclusion room; a 14-year-old, 129-pound boy with learning disabilities who suffocated as his teacher lay on him to restrain him.

Against this backdrop of harm and inequity looms the stunning fact that there’s virtually no evidence that everyday use of restraint or seclusion improves children’s behavior or academic performance. “There are a few isolated, single-subject anecdotes—that’s it,” says Reece Peterson, professor of special education at the University of Nebraska-Lincoln and an expert on restraint, seclusion and other discipline strategies.

It’s widely agreed that restraint (restricting a child’s movement) or seclusion (confining the child in a room or other place) may be necessary if the child is an imminent physical danger to himself or others. But many reported cases don’t rise to the emergency level. “[These techniques are] used a lot when kids don’t comply with a teacher’s request,” says Michael George, director of Centennial School of Lehigh University, a public special education school in Bethlehem, Pa. “It’s done in many, many places in this country. It’s overused—and it’s abuse.”

Many experts worry that the use of seclusion and restraint techniques may be more likely in situations where educators have insufficient behavioral training. A Government Accountability Office investigation into restraint and seclusion practices in schools found that restraint or seclusion often was used as a routine disciplinary tactic—not in response to an emergency—and that school staff often lacked training in safer disciplinary measures. 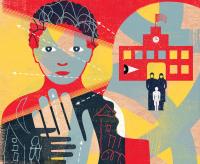 In 2012 the U.S. Department of Education issued 15 basic principles, nonbinding guidance on best practices for the use of restraint and seclusion. Among the key points were these: Restraint should never be used as punishment or discipline, and school staff should be trained regularly in effective disciplinary alternatives—including positive behavioral support methods.

Across the nation, legislators have attempted to limit abusive restraints and seclusions in schools.

Federal bills to curb schools’ use of restraint and seclusion have been introduced every year from 2009 to 2013, but the legislation has consistently stalled. Progress at the state level has been somewhat faster, thanks to media attention and vigorous lobbying by advocates, says Jessica Butler, an attorney who collects and publishes state legislative details on restraint and seclusion for the Autism National Committee.

In 2009, 22 states gave children with disabilities at least some protections in the area of restraint and seclusion; now there are 33, says Butler. Unfortunately, huge variations in the level of protection remain. “It’s a patchwork,” she says, “and too many children still don’t have meaningful protection.”

George attests to the value of these alternative methods. When he arrived at Centennial, there had been 1,064 restraint incidents in the prior school year (for 76 students) and 15,744 minutes of seclusion logged just in the first 20 days of the new school year.

George began requiring all teachers to be trained in a positive reinforcement program that helps educators encourage behavior change in students by repeatedly praising positive things students do and ignoring or gently correcting negative actions. This approach is buttressed by a points system that awards coveted privileges (such as the right to “buy” goods at the student store with points) in return for cooperative behavior. George implemented awards assemblies, and students were taught to acknowledge one another’s progress. A few schoolwide, easy-to-recall slogans made classroom expectations crystal clear.

Teachers’ committees overhauled the curriculum, making it more interactive, engaging and individualized. Procedures were put in place to ensure that when a student doesn’t thrive, the school will reach out and engage the family in the process of identifying the cause of the student’s school troubles and spurring changes in the student’s work or behavior.

By the end of George’s first year at Centennial, restraint and seclusion incidents had decreased dramatically. In 2012-13, there were no seclusions and only six restraints, says George. And academic achievement has improved along with behavior.

Alternatives to restraint and seclusion also have been used successfully in the public schools of Lee’s Summit, Mo., says Kaye Otten, a behavior consultant for the district. She trains teachers in reading students’ body language and other behavioral cues so they can recognize trouble before it starts. Trained teachers and counselors in turn teach students personalized ways of calming down. Teachers and administrators also role-play with students to practice dealing with anger peacefully. If they wish, students may retreat to a “focus room” where a teacher trained in crisis de-escalation is available. The techniques have worked equally well in mainstreamed and special-education classes, says Otten. Teachers learn there can be better techniques than restraint and seclusion.

“The good news is that now there’s more discussion, more awareness about the problem,” notes Curtis Decker, executive director of the National Disability Rights Network—an organization whose investigations were influential in calling attention to the dangers of restraint and seclusion. “We have made some progress, as spotty as it may be. But we need a lot more changes in schools to fully protect children from the abuses we’ve found.”

When a student has an emotional outburst, it can be hard to know what to do.
These basic de-escalation tips from Intervention Central can help.

Create a more equitable behavior management system at your school.