The children take one of two poses: They smile at the camera, holding the book proudly, or they look down, absorbed in their reading. They are a range of  ages and races and genders. They sit on couches or bedsides or in the back seat of a car. Several stand grinning beside the author.

Photos like these aren’t exactly expected on the website of an esteemed historian. But if more historians follow the lead of Erica Armstrong Dunbar, the Charles and Mary Beard Professor of History at Rutgers University, that will change soon enough.

In 2017, Dunbar published Never Caught: The Washingtons’ Relentless Pursuit of Their Runaway Slave, Ona Judge. Readers were fascinated by the story of Judge, who was 22 years old when she escaped enslavement and remained a fugitive for the rest of her life. The book became a finalist for the National Book Award.

“What I knew almost immediately,” Dunbar says, “was that I wanted to be able to translate this kind of history to younger readers.” In January 2019, the Simon & Schuster imprint Aladdin published a young readers’ edition adapted by Dunbar and Kathleen Van Cleve.

That release has special meaning for young readers.

Never Caught has joined a growing slate of popular adaptations for young people, including Margot Lee Shetterly’s young readers’ edition of Hidden Figures, Patricia McCormack’s adaptation of I Am Malala, and Tonya Bolden and Carol Anderson’s We Are Not Yet Equal, a young adult (YA) version of Anderson’s bestselling White Rage.

These 21st-century adaptations upset the tradition of “classics for children” that, for over 200 years, have started young readers on the path to the canon. These new books present cutting-edge scholarship in history, critical race studies, gender studies, queer studies and more. Accessible and developmentally appropriate, they insist that young readers deserve to critically engage with the world around them, and they model what that engagement might look like.

Perhaps that’s why they’re so popular among educators—and why they’re leading middle-grades and YA  books out of the bookstore and into the social studies classroom.

Take Isabel Morales and her 11th grade U.S. history class. Her students have an assigned textbook. But they do most of their reading in two adaptations for young readers: An Indigenous Peoples’ History and We Are Not Yet Equal.

“I think textbooks are making a better effort at integrating histories of all types of Americans,” Morales says. “But I think in these [adapted] books, it’s not a sidebar. It’s not like, ‘Oh, here are the contributions of these people.’ It’s like, ‘No, we’re centering experiences with Black and Native people.’”

Bayard Templeton, who teaches seventh grade U.S. history, has students read Never Caught for the same reason. “The three or four paragraphs in the textbook about the slave trade or about slavery can be good,” he says, “but even in the best of textbooks, it’ll always feel like a little bit of a side note to the larger narrative of the creation of America.”

Students recognize the significance of the choice very quickly, he says, noting that “we might be reading a textbook that has George Washington on the cover, but we’re [also] reading a different historical book that has Ona on the cover.”

Traditionally, adaptions have been designed to introduce young readers to canonical stories and authors.

1807 Tales From Shakespeare | adapted by Charles & Mary Lamb
This early adaptation included retellings of Shakespeare’s comedies as well as tragedies like Hamlet and Macbeth.

1889 The Blue Fairy Book | edited by Charles Lang
Among folk and fairy tales for children is an adaptation of the bestselling novel Gulliver’s Travels, originally written for adult readers.

1912 The Junior Classics | edited by William Patten
This series served as a companion to—and shared an editor with—the popular Harvard Classics series for adults. Included in 10 volumes are retellings of Shakespeare and Sir Walter Scott.

1941 Classic Comics #1 | drawn by Malcolm Kildale
The Three Musketeers is the first novel adapted in this well read comic book series. It originally sold for 10 cents.

1989 Around the World in 80 Days | adapted by Marian Leighton
This young readers’ adaptation was the first of the Great Illustrated Classics series, which would later adapt novels like Pride and Prejudice and The Picture of Dorian Gray.

2016 On the Road | adapted by Melissa Medina and Fredrik Colting
Kerouac’s novel is one of the first adapted by KinderGuides, which has since added titles including Moby Dick and The Odyssey.

The Process of Unlearning

In her preface to the young readers’ edition of Never Caught, Dunbar addresses these dual—and dueling—narratives. “You are about to encounter a story of bravery and heroism that will make you think differently about everything you have learned regarding American history,” she begins.

It’s not an empty promise.

Amanda Vickery, Assistant Professor of Social Studies Education and Race in Education at the University of North Texas, reads the adaptation of Never Caught with pre-service teachers in her social studies methods course. Even at the college level, she says, students “do a lot of unlearning.”

Morales agrees, using the same word—unlearning—to describe the work her high school students do. She says readings from We Are Not Yet Equal started students on a “process of reflecting.” They asked themselves, “What have we been taught about Black history?”

She shares their answer: “‘We’ve been taught that it’s very sad; really sad and bad things happened to them.’” Now, Morales says, students recognize the thinness of that narrative, pointing out, “‘Oh no, it’s not just like Black people were subjects of history. ... They made history, and these are all the ways how.’”

It’s not an accident that trade adaptations spark these re-evaluations for students. Tonya Bolden, co-author of We Are Not Yet Equal, is an award-winning YA novelist and nonfiction writer. Her goal, she says, is “telling the rest of history.” She offers the example of her 2017 YA novel Crossing Ebenezer Creek, which is centered around an understudied 1864 massacre of formerly enslaved people in Georgia.

“I think so often the narrative is bent backs, broken spirits, victim, victim, victim. And what I want to do ... is capture that humanity of enslaved people. Because if everyone was broken down and beaten and had all the love and hope beat out of them, people like me wouldn’t be here.”

I think textbooks are making a better effort at integrating histories of all types of Americans. But I think in these [adapted] books, it’s not a sidebar.

The Work Historians Do

While a more complete account of history is clearly one appeal of adaptations, educators point out that they don’t just tell different stories than the textbook does. They also tell stories differently. That may be another reason these books have found a foothold in social studies classrooms: They model the ways historians organize and research their ideas.

Morales says she chose texts to help organize her course around theories of why events unfolded the way they did, rather than simply giving an account of what happened. She offers an example from An Indigenous Peoples’ History: “The concept of settler colonialism is in there. [These books] are grounded in these concepts and give many examples of them.”

She adds, “The concepts are complex, and students can grapple with them.”

According to Joanna Green, a senior editor at Beacon Press who shepherded the adaptation of An Indigenous Peoples’ History, maintaining complexity is a critical part of the task. She explains that there’s no one-size-fits-all adaptation. Each book she edits in the ReVisioning History for Young People series might look different because each adaptation is designed to best communicate the complex ideas of that particular text to younger readers. But there’s one thing they all have in common.

“The value of these books is that they are so informed by academic scholarship,” she says.

Templeton says that’s one thing he enjoyed about teaching Never Caught. Although the book reads more like a biography or novel than a typical history text, students could still see the academic research behind the story.

“The kids picked up very quickly that she used a lot of, ‘and maybe then Ona did this,’ and ... ‘perhaps the chef was making George’s favorite meal that night,’” he explains. “I think there was an authenticity to that, as opposed to a textbook, which is so authoritative.”

Using what Dunbar calls “informed speculation,” Never Caught models historical thinking for young readers. This process of deduction, Dunbar says, is “a large part of any of the work that historians do, especially on enslaved people, on women, on those who did not leave behind the same kind of recorded evidence that appears in archives.”

Seeing that work made visible shaped his students’ approaches to history, Templeton says. “Kids were asking, ‘Well, did X really happen?’ ‘Was that what happened?’ ‘What do we know for sure?’”

And it wasn’t just the talkative students asking those questions, he reports. While reading Never Caught, students who were quieter “when we were doing our usual approach to history” became “much more involved.” He says students “saw the courage and risk-taking that [Judge] exhibited. They were definitely fascinated. The idea that Ona was going to be given away as a wedding present, or the fact that George Washington was finding loopholes in the law to keep [the people he enslaved] in bondage, really offended and upset the kids. Giving them an authentic story truly resonated with them.”

Dunbar says that connection is key to helping students understand the past. “Everyone respects the courage and the bravery that’s easily seen through Ona’s story,” she says, “and I think it’s those touchstones that allow any reader, from any walk of life, to connect.”

She explains that, when writing, she wanted the “strong narrative arc” of Judge’s history to serve as the foundation of the text, onto which she could then layer “the smells or the sounds of the streets of Philadelphia in the 1780s” and the “historical facts and details that help the reader put all of the pieces of American history together.”

But unified narratives aren’t the only way that adaptations build connection with young readers. No matter how they’re organized, the attentive writing that’s so common in these texts—and often so lacking in textbooks—can help young people lock into and better understand the history they’re reading.

“That’s basically what I try to do: tell a good story,” Bolden says. “I think that the elements of fiction and poetry have a place in nonfiction.”

They certainly have a place for Morales’ students. “They’re very, very, very interested,” she says. “They comment all the time, ‘Oh I didn’t know this.’ ‘I never learned this before.’ ‘This is so interesting.’ ‘This is so sad.’ ... I think it’s really opening their eyes about U.S. history.”

That’s exactly the response these adaptations are intended to evoke. So it’s unsurprising that, when Bolden describes her work, she sounds almost indistinguishable from the educators she says she serves as “backup” for.

The way we write history matters, she explains, “because we want to not just impart information, but we want to reach and touch our young people’s psyches and souls and spirits ... to write to the whole person.”

A Queer History of the United States for Young People
by Michael Bronski, adapted by Richie Chevat
(Beacon Press, 2019)

One Person, No Vote: How Not All Voters Are Treated Equally | A Young Adult Adaptation
by Carol Anderson, with Tonya Bolden
(Bloomsbury, 2019)

Stamped: Racism, Antiracism and You | A Remix of the National Book Award-winning Stamped From the Beginning
by Jason Reynolds and Ibram X. Kendi
(Little, Brown, forthcoming 2020) 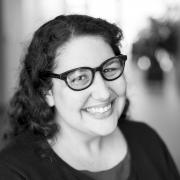