Julia Moves to the United States

Close your eyes for just a minute. Take a deep breath and turn on your imaginations.

Imagine that you are going on a trip with your family—a big trip. Maybe you’re getting into a car, or onto a boat, bus or plane. Don’t forget to buckle your seatbelt!

Now you start moving over the water, on the highway or through the air. You travel a long, long way. It takes hours, maybe days, but finally you arrive. You are in a completely new place. The food smells and tastes different from anything you’ve eaten before. People dress in clothes you’ve never seen.

The kids you meet on the playground speak a different language than you. Their words mean nothing to you. More than anything, you want to talk to them, to make new friends, but they don’t understand what you’re saying, either.

Imagine how you might feel being that new kid in that new place. Now open your eyes.

Julia Alvarez was a little girl the second time her family moved to the United States. People, like Julia’s parents, who move to another country to start a new life are called immigrants. They often experience the same feelings you just imagined.

Julia was born in New York City. Her parents, however, were from a country called the Dominican Republic. When Julia was still a baby, her family moved back to that warm, sunny country. Each summer, Julia’s family shared a big beach house in the Dominican Republic with her aunts, uncles and cousins. There, Julia played with her three sisters and many cousins, laughing loudly and shouting to each other in Spanish. Julia enjoyed having fun, making mischief and making up stories.

The Dominican Republic, though, was an unsafe place at the time. Julia’s father was in danger, and he decided the family should escape. When Julia was 10 years old, they flew back to New York to start a new life.

At first, Julia was very excited to return to where she had been born. But being an immigrant in a new land was harder than she ever imagined. Her family was only able to bring a few suitcases of clothes. Everything else had to stay behind. At first, they had to squeeze six people into a small apartment instead of living in a large house. Julia missed her cousins, and her big happy family. The cold winter made her skin dry and cracked.

School was hard, too. Julia knew some English, but her new classmates spoke so fast. She struggled to understand them. Bullies yelled at her: “Go back where you came from!” They threw rocks at her and teased her about her accent—the way she spoke. At one school, the teachers punished Julia when they heard her speak Spanish. Kids made fun of her frilly dresses and dark curly hair. They turned up their noses at the spicy, garlicky food in her lunch box.

The teasing hurt Julia’s feelings, and she grew quiet and shy. When she wanted to get away from her unhappiness, she escaped between the covers of books. Those stories took Julia’s imagination to wonderful and exciting places. Figuring out new words helped her English get better and better.

Julia changed to fit in and make friends. She tried to hide that she was an immigrant so other kids wouldn’t make fun of her. She only spoke English outside of her home. She fixed her hair to make it straight, not curly. She and her sisters did everything they could to behave like they thought American girls were supposed to behave. 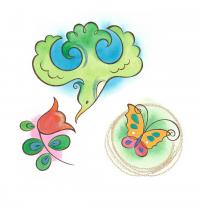 There was one place, however, where Julia felt she could be her true self—in her writing. As she grew older, instead of just reading stories, she began to write them. At first, she tried to write like famous American writers, most of them white male writers. But her life experience gave her a different way of seeing the world. As a young woman, she also made new friends with other Latinas—women from Latin American countries like the Dominican Republic, Chile, Argentina and Colombia. She felt excited about bringing her past to life using words. She started writing more about the Dominican Republic and her childhood. She wrote stories mostly in English and sprinkled them with Spanish words.

Today, Julia Alvarez is a famous author. She calls herself a “Dominican-American writer” and writes poems, books and stories, some of them for children. In her writing, she tells what it is like to be an immigrant in the United States, how it is both amazing and very hard. She wants to help readers see that no matter where we come from, what languages we speak or what we look like, we all belong. We have the wonderful chance to learn together, understand each other, and be kind and helpful to each other.

Right There (In the Text)
Where did Julia Alvarez’s family immigrate from?

Think and Search (In the Text)
In what ways did Julia change herself to fit in when she moved to New York?

Author and Me (In My Head)
How do you think the challenges Alvarez faced made her a better writer?

On My Own (In My Head)
Julia felt she could be her true self when she wrote. When do you feel like your true self?