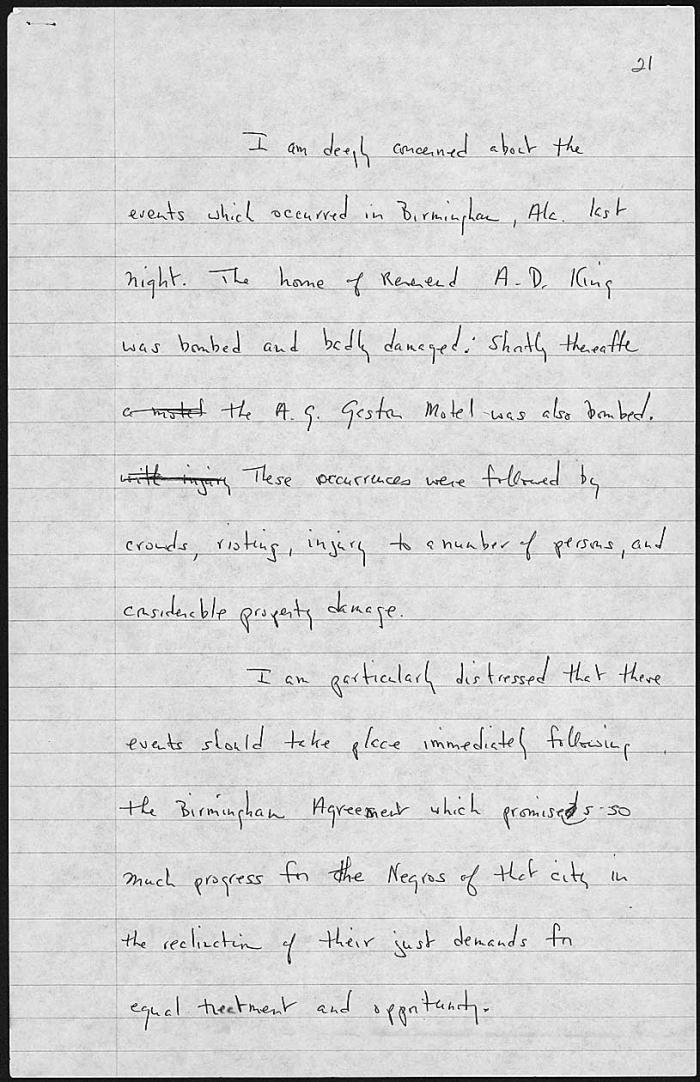 This text was transcribed from John F. Kennedy's handwritten notes. The complete images are available for online viewing here.

I am deeply concerned about the events which occurred in Birmingham, Ala. last night. The home of Reverend A.D. King was bombed and badly damaged; shortly thereafter the A.G. Gaston Motel was also bombed. These occurrences were followed by crowds, rioting, injury to a number of persons, and considerable property damage.

I am particularly distressed that these events should take place immediately following the Birmingham Agreement which promises so much progress for the Negros of that city in the realization of their just demands for equal treatment and opportunity. One of the great moral issues of our time is the achievement of equal opportunity for all citizens. Too long have Negros been denied fair treatment and equal opportunity in all parts of our land. It is increasingly clear that this injustice will no longer be tolerated by them as it should not be tolerated by any American.

These are not problems of Birmingham, the South or Negroes. They are problems which must concern all of us and to which all of us have a moral obligation to put right.

Last week the citizens of Birmingham forced us to that obligation. All of us should be grateful to them for doing so.

Nothing should be tolerated now that jeopardize the progress then made and the agreement to be carried out.

There are extremists who wish to see this agreement fail and will do what they can to achieve this end–by striking at night by inflaming emotions and by inciting or inviting violence.

Source
This text is in the public domain.
Text Dependent Questions