Army Office Letter and “I am Committee” Broadside

This letter and accompanying broadside outlines rules for African Americans made by an unknown source.
Author
Unknown
Grade Level
6-8 9-12
Teach This in a Learning Plan
X
Add to an Existing Learning Plan
START A NEW LEARNING PLAN
Bookmark Army Office Letter and “I am Committee” Broadside
Print

This text is part of the Teaching Hard History Text Library and aligns with Key Concepts 4 and 8. 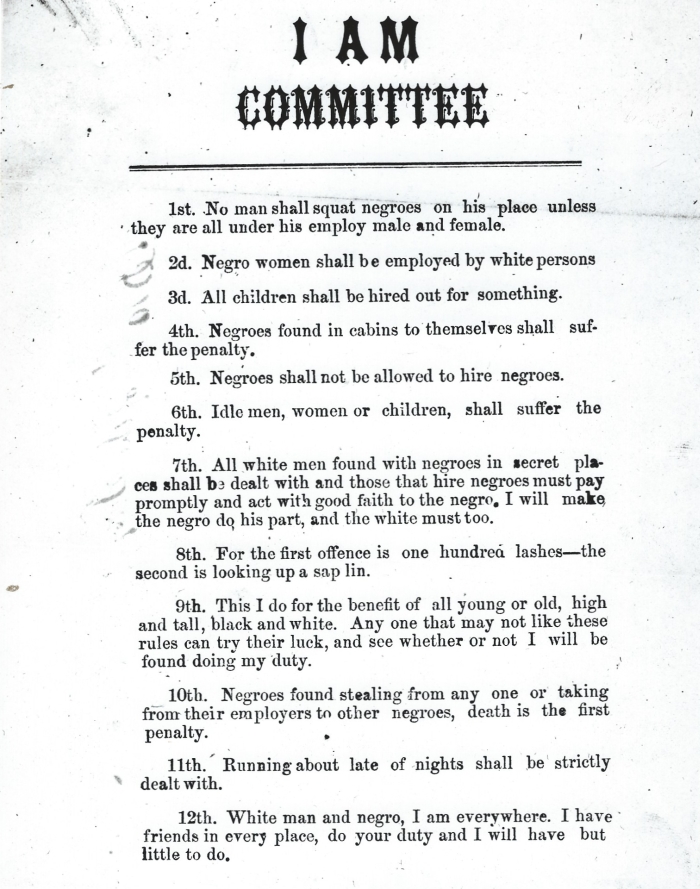 1st. No man shall squat negroes on his place unless they are all under his employ male and female.

2d. Negro women shall be employed by white persons.

3d. All children shall be hired out for something.

4th. Negroes found in cabins to themselves shall suffer the penalty.

5th. Negroes shall not be allowed to hire negroes.

6th. Idle men, women or children, shall suffer the penalty.

7th. All white men found with negroes in secret places shall be dealt with and those that hire negroes must pay promptly and act with good faith to the negro. I will make the negro do his part, and the white must too.

8th. For the first offence is one hundred lashes—the second is looking up a sap lin.

9th. This I do for the benefit of all young or old, high and tall, black and white. Anyone that may not like these rules can try their luck, and see whether or not I will be found doing my duty.

10th. Negroes found stealing from any one or taking from their employers to other negroes, death is the first penalty.

11th. Running about late of nights shall be strictly dealt with.

12th. White man and negro, I am everywhere. I have friends in every place, do your duty and I will have but little to do.

Army Officer at Gallatin, Tennessee, to the Headquarters of the Department of the Tennessee, Enclosing an Anonymous Broadside

I have the honor to report that I have taken from a house at “Cross Plains” in Robertson Co, 200 copies of the enclosed “circular”: a number of copies had been distributed to certain persons in that neighborhood, and by some of them, read to the colored people living about, at the same time notifying them that they had “been appointed to “see the rules enforced”, and that they intended to do it

Several of the “circulars” have been nailed to the doors of houses located in that vicinity, about Richland, near this place, and near Springfield Tenn,

I am not certain that any of “the penalties” have been inflicted, the negroes are held in such a state of terror that they dare not tell, and the whites, from sympathy with the villains, will not.

I would also ask if General Order No 44 A.G.O. July 6. '66 has been superseded by any subsequent order. I am sir Very Respectfully Your Obedient Servant

Source
This text is in the public domain. Retrieved from http://www.freedmen.umd.edu/Brady.html.
Text Dependent Questions
Reveal Answers
Teach This in a Learning Plan
X
Add to an Existing Learning Plan
START A NEW LEARNING PLAN
Print