This text is part of the Teaching Hard History Text Library and aligns with Key Concepts 5 and 6. 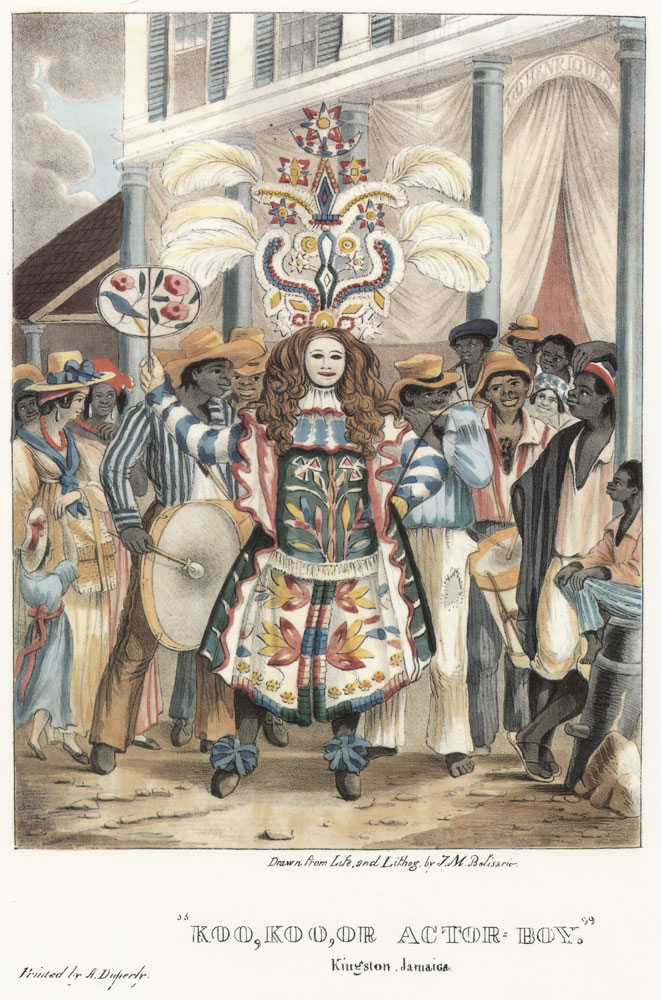 Captioned "Koo, Koo, or Actor Boy," this lithograph depicts an elaborately costumed and masked male dancer surrounded by on-lookers and musicians; he carries a whip and fan, the former used for clearing his path, the latter for cooling himself when his mask is lifted. Issac Mendez Belisario gives a detailed description of John-Canoe festivities and also speculates on the origin of the name. With respect to this illustration, he writes the "band consists of drums and fifes only, to which music the Actor stalks most majestically, oftentimes stopping to afford the by-standers a fair opportunity of gazing at him . . . . The foundation [of his headdress] is an old hat, affording the wearer the means of sustaining the superstructure, to which it is firmly attached, and composed of various colored beads, bugles, spangles, pieces of looking-glass, tinsel, etc. attached to a pasteboard form trimmed round the edges with silver lace, surmounted with feathers.

Source
This text is in the public domain. Image and caption both retrieved from http://slaveryimages.org/details.php?categorynum= 12&categoryName=Music&theRecord=6&recordCount=55.
Text Dependent Questions
Reveal Answers
Teach This in a Learning Plan
X
Add to an Existing Learning Plan
START A NEW LEARNING PLAN
Print