The Selling of Joseph: A Memorial

In 1700, Samuel Sewall, a prominent judge of the Province of Massachusetts Bay, wrote the first tract against slavery from New England.
Author
Samuel Sewall
Grade Level
6-8 9-12
Teach This in a Learning Plan
X
Add to an Existing Learning Plan
START A NEW LEARNING PLAN
Bookmark The Selling of Joseph: A Memorial
Print

This text is part of the Teaching Hard History Text Library and aligns with Key Concept 8. 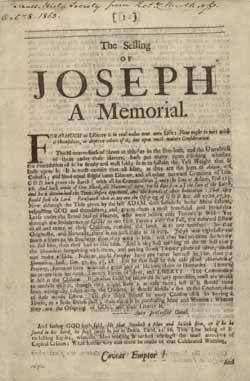 The Selling of JOSEPH

FOR AS MUCH as Liberty is in real value next unto Life: None ought to part with it themselves, or deprive others of it, but upon most mature Consideration.

The Numerousness of Slaves at this day in the Province, and the Uneasiness of them under their Slavery, hath put many upon thinking whether the Foundation of it be firmly and well laid; so as to sustain the Vast Weight that is built upon it. It is most certain that all Men, as they are the Sons of Adam, are Coheirs; and have equal Right unto Liberty, and all other outward Comforts of Life.

GOD hath given the Earth [with all its Commodities] unto the Sons of Adam, Psal 115. And hath made of One Blood, all Nations of Men, for to dwell on all the face of the Earth; and hath determined the Times before appointed, and the bounds of their habitation: That they should seek the Lord. Forasmuch then as we are the Offspring of GOD.

Now although the Title given by the last ADAM, doth infinitely better Mens Estates, respecting GOD and themselves; and grants them a most beneficial and inviolable Lease under the Broad Seal of Heaven, who were before only Tenants at Will: Yet through the Indulgence of GOD to our First Parents after the Fall, the outward Estate  of all and every of the Children, remains the same, as to one another. So that Originally, and Naturally, there is no such thing as Slavery. Joseph was rightfully no more a Slave to his Brethren, then they were to him: and they had no more Authority to Sell him, than they had to Slay him. And if they had nothing to do to Sell him;  the Ishmaelites bargaining with them, and paying down Twenty pieces of Silver, could not make a Title. Neither could Potiphar have any better Interest in him than the Ishmaelites had. For he that shall in this case plead Alteration of  Property, seems to have forfeited a great part of his own claim to Humanity.

There is no proportion between Twenty Pieces of Silver, and LIBERTY. The Commodity itself is the Claimer. If Arabian Gold be imported in any quantities, most are afraid  to meddle with it, though they might have it at easy rates; lest if it should have been wrongfully taken from the Owners, it should kindle a fire to the Consumption of their whole Estate. ‘Tis pity there should be more Caution used in buying a Horse, or a little lifeless dust; than there is in purchasing Men and Women: Whenas  they are the Offspring of GOD, and their Liberty is, Auro pretiosior Omni.

And seeing GOD hath said, "He that Stealeth a Man and Selleth him, or if he be found in his hand, he shall surely be put to Death." Exod. 12.16. This Law being of Everlasting Equity, wherein Man Stealing is ranked amongst the most atrocious of Capital Crimes: What louder Cry can there be made of the Celebrated Warning, Caveat Emptor!

And all thing considered, it would conduce more to the Welfare of the Province, to have White Servants for a Term of Years, than to have Slaves for Life. Few can endure to hear of a Negro’s being made free; and indeed they can seldom use their freedom well; yet their continual aspiring after their forbidden Liberty, renders them Unwilling Servants. And there is such a disparity in their Conditions, Color & Hair, that they can never embody with us, and grow up into orderly Families, to the Peopling of the Land: but still remain in our Body Politick as a kind of extra-vasat Blood. As many Negro men as there are among us, so many empty places there are in our Train Bands, and the places taken up of Men that might make Husbands for our Daughters. And the Sons and Daughters of New England would become more like Jacob, and Rachel, if this Slavery were thrust quite out of doors. Moreover it is too well known what Temptations Masters are under, to connive at the Fornification of their Slaves; lest they should be obliged to find them Wives, or pay their Fines.

It seems to be practically pleaded that they might be Lawless; ’tis thought much of, that the Law should have Satisfaction for their Thefts, and other Immoralities; by which means, Holiness to the Lord, is more rarely engraven upon this sort of Servitude. It is likewise most lamentable to think, how in taking Negros out of Africa, and Selling of them here, That which GOD ha’s joyned together men do boldly rend asunder; Men from their Country, Husbands from their Wives, Parents from their Children.

How horrible is the Uncleanness, Mortality, if not Murder, that the Ships are guilty of that bring great Crouds of these miserable Men, and Women. Methinks, when we are bemoaning the barbarous Usage of our Friends and Kinsfolk in Africa:  it might not be unseasonable to enquire whether we are not culpable in forcing the Africans to become Slaves amongst our selves. And it may be a question whether all the Benefit received by Negro Slaves, will balance the Accompt of Cash laid out upon them; and for the Redemption of our own enslaved Friends out of Africa. Besides all the Persons and Estates that have perished there.

Answ. Of all Offices, one would not begg this; viz. Uncall’d for, to be an  Executioner of the Vindictive Wrath of God; the extent and duration of which is to us uncertain. If this ever was a Commission; How do we know but that it is long  since out of date? Many have found it to their Cost, that a Prophetical Denunciation of Judgment against a Person or People, would not warrant them to inflict that evil. If it would, Hazael might justify himself in all he did against his Master, and the Israelites, from 2 Kings 8. 10, 12.

But it is possible that by cursory reading, this Text may have been mistaken. For Canaan is the Person Cursed three times over, without the mentioning of Cham. Good Expositors suppose the Curse entailed on him, and that this Prophesie was accomplished in the Extirpation of the Canaanites, and in the Servitude of the Gibeonites, Vide Pareum. Whereas the Blackmores are not descended of Canaan, but of Cush.

Psal. 68. 31. Princes shall come out of Egypt [Mizraim] Ethopia [Cush] shall soon stretch out her hands unto God. Under which Names, all Africa may be comprehended; and the Promised Conversion ought to be prayed for. Jer. 13, 23. Can the Ethiopian change his skin? This shews that Black Men are the Posterity of Cush: Who time out of mind have been distinguished by their Colour. And for want of the true, Ovid assigns a fabulous cause of it.

Obj. 2. The Nigers are brought out of a Pagan Country, into places where the Gospel is Preached.

Answ. Evil must not be done, that good may come of it. The extraordinary and comprehensive Benefit accruing to the Church of God, and to Joseph personally, did not rectify his brethrens Sale of him.

Obj. 3. The Africans have Wars with one another: our Ships bring lawful Captives taken in those Wars.

Answ. For ought is known, their Wars are much such as were between Jacob’s Sons and their Brother Joseph. If they be between Town and Town; Provincial, or National: Every War is upon one side Unjust. An Unlawful War can’t make lawful Captives. And by Receiving, we are in danger to promote, and partake in their Barbarous Cruelties. I am sure, if some Gentlemen should go down to the Brewsters to take the Air, and Fish: And a stronger party from Hull should Surprise them, and Sell them for Slaves to a Ship outward bound: they would think themselves unjustly dealt with; both by Sellers and Buyers. And yet ’tis to be feared, we have no other kind of Title to our Nigers. Therefore all things whatsoever ye would that men should do to you, do ye even so to them: for this is the Law and the Prophets. Matt. 7. 12.

Obj. 4. Abraham had servants bought with his Money, and born in his House.

Answ. Until the Circumstances of Abraham’s purchase be recorded, no Argument can be drawn from it. In the mean time, Charity obliges us to conclude, that He knew it was lawful and good.

Blessing in lieu of any loss they might conceipt they suffered thereby. Deut. 15. 18.  And since the partition Wall is broken down, inordinate Self love should likewise be demolished. GOD expects that Christians should be of a more Ingenuous and benign frame of spirit. Christians should carry it to all the World, as the Israelites were to carry it one towards another. And for men obstinately to persist in holding their Neighbours and Brethren under the Rigor of perpetual Bondage, seems to be no proper way of gaining Assurance that God ha’s given them Spiritual Freedom. Our Blessed Saviour ha’s altered the Measures of the Ancient Love-Song, and set it to a most  Excellent New Tune, which all ought to be ambitious of Learning. Matt. 5. 43, 44.

John 13. 34. These Ethiopians, as black as they are; seeing they are the Sons and Daughters of the First Adam, the Brethren and Sister of the Last ADAM, and the Offspring of GOD; They ought to be treated with a Respect agreeable.

BOSTON of the Massachusets;

Source
This text is in the public domain. Retrieved from https://www.masshist.org/database/53.
Text Dependent Questions
Reveal Answers
Teach This in a Learning Plan
X
Add to an Existing Learning Plan
START A NEW LEARNING PLAN
Print