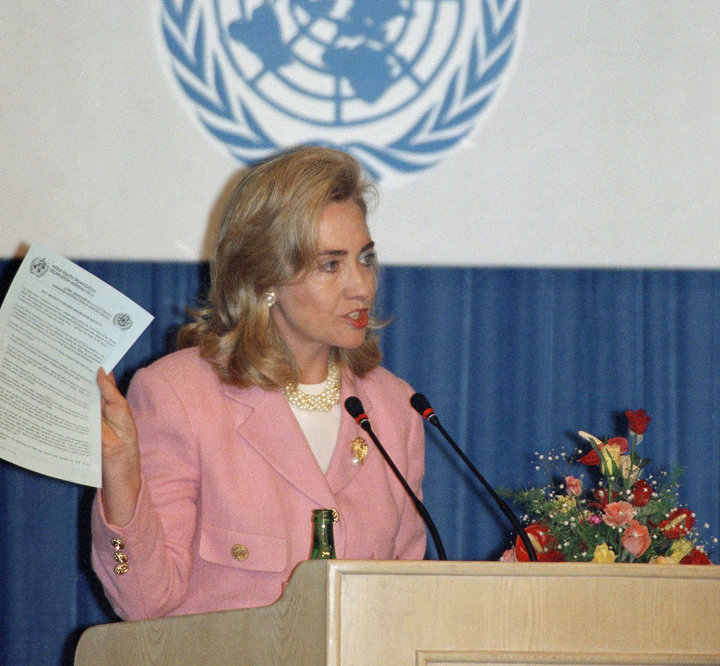 Good evening, and let me express my deep honor and pleasure at being here. I want to thank Director General Tokayev and Ms. Wyden along with other ministers, ambassadors, excellencies, and UN partners. This weekend, we will celebrate Human Rights Day, the anniversary of one of the great accomplishments of the last century.

Beginning in 1947, delegates from six continents devoted themselves to drafting a declaration that would enshrine the fundamental rights and freedoms of people everywhere. In the aftermath of World War II, many nations pressed for a statement of this kind to help ensure that we would prevent future atrocities and protect the inherent humanity and dignity of all people. And so the delegates went to work. They discussed, they wrote, they revisited, revised, rewrote, for thousands of hours. And they incorporated suggestions and revisions from governments, organizations, and individuals around the world.

At three o'clock in the morning on December 10th, 1948, after nearly two years of drafting and one last long night of debate, the president of the UN General Assembly called for a vote on the final text. Forty-eight nations voted in favor; eight abstained; none dissented. And the Universal Declaration of Human Rights was adopted. It proclaims a simple, powerful idea: All human beings are born free and equal in dignity and rights. And with the declaration, it was made clear that rights are not conferred by government; they are the birthright of all people. It does not matter what country we live in, who our leaders are, or even who we are. Because we are human, we therefore have rights. And because we have rights, governments are bound to protect them.

In the 63 years since the declaration was adopted, many nations have made great progress in making human rights a human reality. Step by step, barriers that once prevented people from enjoying the full measure of liberty, the full experience of dignity, and the full benefits of humanity have fallen away. In many places, racist laws have been repealed, legal and social practices that relegated women to second-class status have been abolished, the ability of religious minorities to practice their faith freely has been secured.

In most cases, this progress was not easily won. People fought and organized and campaigned in public squares and private spaces to change not only laws, but hearts and minds. And thanks to that work of generations, for millions of individuals whose lives were once narrowed by injustice, they are now able to live more freely and to participate more fully in the political, economic, and social lives of their communities.

Now, there is still, as you all know, much more to be done to secure that commitment, that reality, and progress for all people. Today, I want to talk about the work we have left to do to protect one group of people whose human rights are still denied in too many parts of the world today. In many ways, they are an invisible minority. They are arrested, beaten, terrorized, even executed. Many are treated with contempt and violence by their fellow citizens while authorities empowered to protect them look the other way or, too often, even join in the abuse. They are denied opportunities to work and learn, driven from their homes and countries, and forced to suppress or deny who they are to protect themselves from harm.

I am talking about gay, lesbian, bisexual, and transgender people, human beings born free and given, bestowed equality and dignity, who have a right to claim that, which is now one of the remaining human rights challenges of our time. I speak about this subject knowing that my own country’s record on human rights for gay people is far from perfect. Until 2003, it was still a crime in parts of our country . Many LGBT Americans have endured violence and harassment in their own lives, and for some, including many young people, bullying and exclusion are daily experiences.  So we, like all nations, have more work to do to protect human rights at home.

Now, raising this issue, I know, is sensitive for many people and that the obstacles standing in the way of protecting the human rights of LGBT people rest on deeply held personal, political, cultural, and religious beliefs.  So I come here before you with respect, understanding, and humility.  Even though progress on this front is not easy, we cannot delay acting. So in that spirit, I want to talk about the difficult and important issues we must address together to reach a global consensus that recognizes the human rights of LGBT citizens everywhere.

The first issue goes to the heart of the matter. Some have suggested that gay rights and human rights are separate and distinct; but, in fact, they are one and the same. Now, of course, 60 years ago, the governments that drafted and passed the Universal Declaration of Human Rights were not thinking about how it applied to the LGBT community. They also weren’t thinking about how it applied to indigenous people or children or people with disabilities or other marginalized groups.  Yet in the past 60 years, we have come to recognize that members of these groups are entitled to the full measure of dignity and rights, because, like all people, they share a common humanity.This recognition did not occur all at once. It evolved over time. And as it did, we understood that we were honoring rights that people always had, rather than creating new or special rights for them. Like being a woman, like being a racial, religious, tribal, or ethnic minority, being LGBT does not make you less human. And that is why gay rights are human rights, and human rights are gay rights.

Source
This text is in the public domain.
Text Dependent Questions
Reveal Answers
Teach This in a Learning Plan
X
Add to an Existing Learning Plan
START A NEW LEARNING PLAN
Print