Not True! Gender Doesn't Limit You!

What works—and what doesn’t—when it comes to teaching young children about gender bullying?
Peggy Moss
Issue 32, Fall 2007
Bookmarked 6 times
Illustration by Eili-Kaija Kuusniemi
Add to a Learning Plan
X
Add to an Existing Learning Plan
START A NEW LEARNING PLAN
All articles from this issue
Print

And wait, what about that one? He has long hair. Very long. He. Looks. Like. A. Girl. What do we do with him?

We watch him drop out of school.

Ultimately, that was the stereotype Rebecca Bigler couldn't stomach: The story of a bright, engaged, Native American student who wore his hair long in observance of tribal tradition. A student whose school experience was so rife with teasing and harassment that he dropped out in the 3rd grade.

"He was put in an untenable cultural bind," said Bigler, a psychologist at the University of Texas-Austin whose nationally recognized research focuses on racial stereotyping and gender role development. "The school couldn't figure out a way to make room for a boy with a ponytail."

Studies indicate that adults have made enormous strides in reducing gender biases toward other adults; yet ironically, as parents and educators, adults leave little room for children who are "gender atypical."

In turn, children internalize gender stereotypes and play a key role in enforcing them. By preschool, boys have begun to mete out punishment to other boys who play with "girls' toys" or demonstrate a lack of interest in aggressive play. In one study, a kindergarten girl who said she didn't like dresses was instructed by a classmate, "If you're a girl, you have to wear dresses sometimes. That's how people know you are a girl."

In addition to feeling pressure to conform to gender stereotypes that may contradict how they really feel, children who are gender atypical are more likely to be bullied and, ultimately, to feel less contented with themselves and with school.

Last spring, she organized a research project to determine whether young students could be taught to challenge sexist remarks made by their peers — and, if they could be, whether their gender attitudes would change. Importantly, she wanted to conduct the study in an actual school.

St. Francis Elementary is just up the road from Bigler's research lab and is a tad unusual. It's a private school but does not test for admissions. It's religious but nondenominational. It serves 372 students in grades pre-K through 8, has a large scholarship population and may well be the most diverse school in Austin – public or private.

Physically, St. Francis is a hodge-podge of tradition and spunk. Basketball trophies crowd a glass case on the left of the entrance, and St. Francis himself stands under a potted plant on the right. The student garden springs up behind an enormous, plush, red leather sofa. Beyond the garden is the cafeteria, which is also the Little Gym, and doubles as the chapel.

On a hallway billboard, Akshara, Caitlin, Narali, Shreyas, Peyton and Jacob have written two-sentence essays about what they will do when they are president. Opposite their essays are student-made posters on Helen Keller, Edwin Hubble, Houdini and Buddha. Under the Lord Buddha is a delicately crafted portrait of Joan of Arc. She is made of orange construction paper and dressed in tin foil.

Bigler pitched the idea for her gender bullying study to St. Francis and found a key ally in Head of School Barbara Porter. Together, they briefed staff members and gave teachers control over timing and certain study logistics. With help from a Teaching Tolerance grant, the project launched in March 2006. 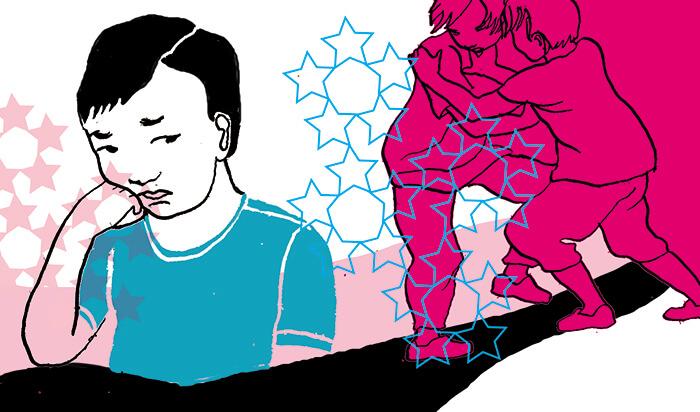 The project began with a pre-test of students in kindergarten through 3rd grade. They were asked questions to measure their gender contentedness, whether they felt pressure from peers or adults to conform with gender stereotypes, and their sense of self worth.

Students also were asked whether they would intervene, or speak up, in response to sexist comments such as, "You can't play house; you're a boy." The children unanimously responded that they would not say a word.

Bigler and her team then divided the students into two groups.

Both groups received six lessons on gender. The first, or "modeling," group heard stories about people who had challenged gender stereotypes and learned about the accomplishments of women and men in atypical gender roles.

The second, or "practice," group received direct instruction about intervening. Specifically, students learned when to challenge sexist remarks and exactly what to say. Then they performed skits in which they used the phrases they'd learned.

The practice group learned five expressions, or interventions:
You can't say that boys [girls] can't play!
Not true, gender doesn't limit you!
Give it a rest, no group is best!
That's weird, being boys and girls doesn't matter here!
I disagree! Sexism is silly to me!

An early ethical dilemma arose as the team considered the use of a third group — a "control." How does a school withhold helpful information from some of its students? Ultimately, Porter and Bigler decided that St. Francis could not. Instead, the ad hoc control group was formed from the students who entered the school after the program was already under way. 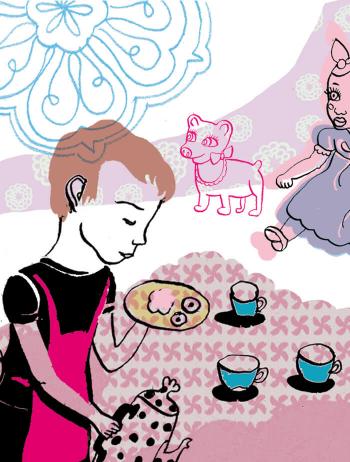 What worked, it turns out, was not reading about people who defy gender stereotypes. What affected students' attitudes and behaviors was learning and practicing what to say when gender bullying occurs.

Children in the practice group were more likely to say they would intervene when they felt excluded or thought a peer was being unfairly targeted. Perhaps more importantly, the practice children, unlike their peers in either the control group or the modeling group, actually spoke up when Bigler's team set up an elaborate post-test that created an opportunity for students to speak up after a sexist remark.

Researchers discovered something else, too, something unexpected: Practice group students began teaching the "comeback" refrains to peers. Almost a year later, many students in the modeling group — who had never been taught these expressions — knew them verbatim.

Teachers say this is because students found the rhyming expressions novel and catchy. They also acknowledge that the school climate fundamentally shifted. As one teacher noted, "Kids this age have a well-developed sense of fairness. Once they made that connection, they were right on this stuff."

Students' interventions weren't limited to peers, either. Shortly after they had received their six weeks of instruction, a new drama teacher brought in costumes for kindergarten and 1st-grade students.

"OK," the teacher said, setting down one box of costumes by the windows, "these are the girl costumes."

She placed the costumes for boys on the other side of the classroom. As they pulled Darth Vader and superhero costumes from their box, the boys couldn't help looking over at the frilly tutus and pink princess dresses across the room; the girls did the same.

Gene,* a kindergartner who'd been in the practice group, was frustrated. Finally he spoke up. "They don't have to be just for boys, do they?"

The drama teacher was caught off guard. "Well, no, I guess," she said and started to walk toward the containers, to pull them together. But the boys had already started to pull on tutus and dance around, as the girls wriggled themselves into Spiderman tights.

The classroom teacher, Ms. Ballentine, sat quietly at her desk and watched. "It was incredible," she said. "How happy they were. I think about how it must have been for all the other kids in that room to hear a kindergartner speak up to an adult."

That Gene, a practice group student, had spoken up, was a predictable outcome. That he spoke up to an adult, in front of older children, was the surprise.

What none of the researchers or teachers counted on was that actions like his would be contagious. "It wasn't just the students," Ballentine said. "It was the teachers, too. We all started paying closer attention to what we were saying."

Although this study has limitations, its findings are clear: Teachers and schools need to talk explicitly with young children about gender bullying and how to interrupt it.

"This is a simple, little inoculation," says Bigler. "Every teacher can write these five rules on the board and run through them every day, telling kids that people may say things they don't agree with, like, ‘this is the girls' aisle,' but they are empowered to say something back: ‘I don't agree with that. Gender doesn't limit you!' And when kids say it, over time, they start to believe it." Brad, an articulate 3rd-grader with large, brown eyes, isn't a believer — just yet. Brad doesn't like to wrestle, because he doesn't like to hurt people.

"If you don't wrestle and you're a boy," Brad says, "they call you a wimp. You develop a reputation that you are afraid to stand up and fight." And that puts him in a difficult position. If he doesn't play, he fears he might get beaten up.

Brad doesn't tell teachers, because he's afraid the children will punish him for telling. Besides, he'd rather handle the problem himself. And he thinks he knows how. He'll use the words he learned during the study.

* Students names have been changed.

The Gender and Racial Attitudes Lab

When the Gender and Racial Attitudes Lab (GARAL) at the University of Texas at Austin opened its doors in 1991, Dr. Rebecca Bigler, a psychologist with a strong interest in the effects of intergroup learning, prejudice and social attitudes among children, was determined that GARAL would not only study and quantify change, but make it.

"The impetus was really my own desire to better understand the factors that cause the formation of gender and racial attitudes among children and how best to prevent and reduce gender and racial biases," says Bigler, the first and only director of the Lab, a part of UT's Children’s Research Laboratory and Department of Psychology.

Sixteen years down the road, Bigler, now also affiliated with the Women's and Gender Studies program, continues to guide her staff to development of important research, curricula, and experimental paradigms. Today, GARAL has four main areas of focus: gender and racial attitudes in children's development; the role of intergroup attitudes and concepts of self; examination of external factors that shape group prejudices, stereotyping, and discrimination; and the mechanisms of gender and racial attitude change. The lab is an important research tool for multicultural educators and scholars and a source of innovative classroom programs for teachers.

Bigler says she has been particularly pleased with the enthusiasm for the lab's mission among both undergrad and grad students who find GARAL a place to explore theories and also practice hands-on application of techniques to affect social justice change in child development.

She also knows that the work has just begun.

"In general, I would say that there is a great deal left to know about how to create diverse, tolerant communities," says Bigler, a much-published author in this field. "Just to give you one example — there is an increasing movement in education to create single-gender schools, and, simultaneously, schools are becoming more racially segregated. I don't think that we know nearly enough about what the consequences of these changes will be."