Anjelica Morales looked down through her glasses at her schoolwork, counting with her hands to make sure she was getting it right. A bit frustrated, she tried again. The rest of the students in Rudy Valenzuela’s class were making noise, and it was hard for her to concentrate. But it’s the one class she looks forward to every day, so she kept on.

Tapping the guitar with her palm, she felt she finally got the notes and rhythm right and nodded to Valenzuela to start the lesson. His advanced mariachi class at Roskruge Bilingual Magnet Middle School in Tucson, Ariz., dove into the middle of a popular Mexican ballad.

Other students feel the same as Morales about the mariachi class. It’s a place where they can get some peace during the academic day, though Valenzuela and the school’s administrators know that can all change at next year’s budget review.

“When the district proposes cuts, we do look at arts first,” José Olivas, Roskruge’s principal, said. “Right now we need a third social studies teacher. I hate to say it but we have to think, ‘Are academics more important than the arts?’”

The students in the advanced mariachi class— mostly eighth graders— would probably say “no.” The 102-year-old school draws students from all over the district to participate in the highly-acclaimed music program. Each student has to earn a spot in the band. And as Olivas points out, this is what many students live for at school.

“Our role as educators is to try to help students identify where their strengths are,” he says. “Some students are more able in the arts—it’s the only place they shine.”

Yet art classes all over the country are under siege. The passage of the No Child Left Behind law in 2001, which measures student achievement based on English and math scores, has pressured schools to cut the arts.

A 2006 survey by the Center on Education Policy found that 44 percent of school districts had increased time for English and math while cutting time for other subjects. And a follow- up study done in 2008 found that 16 percent had cut elementary school class time for music and art. The declines have been sharpest in low-income schools.

But the decline in arts education is decades in the making, and the lingering effects of the current recession have not helped. The National Endowment for the Arts (NEA), using a 2008 U.S. Census Bureau survey, found across-the-board declines in arts education. Among children of college graduates, 27 percent said they had never taken an arts class, compared with 12 percent in 1982. For children whose parents graduated from high school, the number rose to 66 percent from 30 percent in 1982.

Roskruge Principal José Olivas was lucky this year. With the school at capacity at 700 K-8 students, the Tucson Unified School District told him to keep the same budget as the year before. That meant the middle school was able to keep its art, dance, foklorico dance, mariachi, hip-hop and physical education classes. (Volunteers teach the elementary art classes after school, so they don’t factor into financial planning.)

Morales said her mom transferred her to Roskruge specifically for the mariachi program when she reached middle school. Though she has been playing the guitar for only two years, she strums and picks at the strings as if she were born to do it. Every student in the advanced class has to keep grades at a C level and above to perform at public events and competitions. When asked what her course of action would be if the district were to take away the class, she paused. A look of shock flashed across her face.

“I guess I would move schools,” she said, after taking some time to think about it and re-tune her guitar.

Earlier this year, the Obama administration released a report from the President’s Committee on the Arts and the Humanities. In an effort to check the long decline in arts education, the report called for more money and better teaching strategies. It also called for a new approach that doesn’t treat arts education as a frill that can be cut every time budgets get tight.

No study has proven conclusively that arts education directly improves student performance. But the president’s report states that decades of research show a link between highquality arts education and strong educational outcomes.

For José Olivas at Roskruge, no more research is needed.

“Without [arts classes], they might not concentrate on their other courses,” he says. “Once they get a taste of success in whatever class it may be, it spills over [into other academic work].”

Schools struggling financially and searching for more funds and grants and trying to achieve Adequate Yearly Progress— which is mostly based on reading and math scores—may not realize they are doing a disservice to their students by focusing on a few subjects and not keeping their curricula well-rounded. 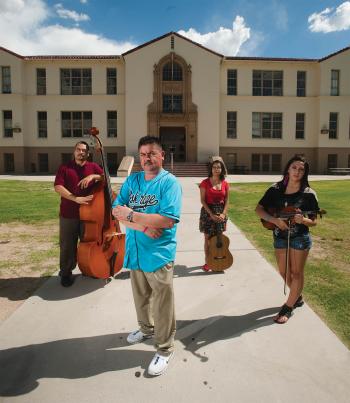 One program in particular, Beyond Basics, has entered the schools to give them the arts classes and tutoring students need to succeed.

“Our art program has a couple of main components. Bring in a child that avoids any academic setting because they aren’t confident in their scholastic skills, and we’ll try to turn that around,” Pamela Good, president and founder of Beyond Basics, said.

“We can bring them into art, and they might have a positive experience and it can validate their self-worth in a classroom setting. Then we work from there and get them reading.”

The program immerses students in art by taking small field trips to galleries or by having artists visit the schools and talk about their work.

According to Good, the program is based on the understanding that children exposed to educational curricula beyond the basic school system offerings will achieve higher scores on exams and have a greater chance of achieving excellence beyond their public school careers.

“For children living in poverty, they don’t have the exposure to things that everyday society takes for granted, like art,” Good said. “We want to expand their world in huge ways through the arts. Art is one of those areas that everyone has an opinion about and can appreciate. When we bring art into the school it adds vibrance and creativity. When the students create art, they are being celebrated in that space. It breaks down so many barriers that we all have built up, but children in poverty might have built up many more.”

Beyond Basics’ programs take place during the school day and at no cost to the schools, the district or individual students.

Attend school concerts, plays and musicals with a few colleagues. Shake your students' hands after the performance. Congratulate them in class the next day.

“It is an answer, a solution for public education to poor schools,” Good said. “We hear all the time what the problems are and it may take many, many years to solve some of those. But in the meantime there are little children that need the service.”

Those districts that can provide arts instruction often see their hard work validated when report cards come out.

Corina Switzer, an eighth-grader at Roskruge, said she works extra hard in her classes to be able to sing with the mariachi class. Her grades in algebra and language arts aren’t what they should be. But her friends offer to help her with tutoring just to keep her on stage.

“If they took mariachi away from me, I wouldn’t be able to concentrate on anything else,” she said. With the Tucson International Mariachi Conference only a week away, she said she’d give up her lunch and free time to make sure she got the C’s she needs.

“I can’t imagine what these kids would do without the program—this class is like their break from core academics,” said Rudy Valenzuela, the mariachi teacher. “But what I seem to notice is that at most of the honor awards announcements, most of the kids in my classes are the ones up there getting a certificate.”

Portfolio Activity for “We ♥ Art!”