You’re Not from Around Here

Adams-Friendship High School sits in the center of Wisconsin, a few miles east of a national wildlife refuge, surrounded by farmland. Vincent High School, in Milwaukee, sits near the northern edge of the city, a few blocks from a highway. Two schools in the same state, separated by a three-hour car ride and a mile-long list of assumptions about what people “over there” are like.

Last spring, students from both schools spent a day together at the University of Wisconsin-Stevens Point. It was the culmination of an online literature class called the UWSP Connections Project, led by pre-service teachers in professor Barbara Dixson’s English education course. In virtual classrooms, students read and discussed books that examined issues of race, class and geography.

The online interactions gave them a starting place—but when they met in person, students were nervous.

“A lot of students from Adams had never met someone who was African American,” Dixson says. “They expected the students from Milwaukee to be like black people they’ve seen on television. And the idea of living in a city seemed scary to them.”

Students from Milwaukee weren’t sure what to expect, either. They were afraid of being attacked by deer. And they worried they would have little in common with the kids from rural Adams-Friendship.

At first, students weren’t sure what to say to each other. But by the end of the day—after a tour of campus, sharing final presentations, eating lunch in the dining hall—they were almost completely intermingled, connecting on Facebook, hugging each other goodbye.

On its surface, the Connections Project helps pre-service teachers practice their instruction skills. But at its core, the project accomplishes something far more fundamental: It helps students overcome stereotypes about other places and the people who live there.

“We hope they’ll realize that people who seem really, really different actually have a huge amount in common,” Dixson says. “It’s a diverse universe out there, and students need to know how to live in a diverse world.”

Sometimes they’re aimed close to home, like Karin Schwarz’s students in rural Iowa, who think nearby cities are “big and scary and that bad things happen there.”

And sometimes they’re directed to far-away places, like Stephanie Carrillo’s students in southern California, who think the Midwest is “dreadfully boring; filled with cows, farms and malls.”

Regional stereotypes form the basis of popular jokes and television shows; according to a 2008 study, they may be grounded, at least in part, in reality. Research published in Perspectives on Psychological Science found links between geography and personality traits—for example, New Yorkers were statistically more likely to be neurotic than, say, people in Colorado; Californians were statistically more open-minded than people in Tennessee.

As a result, regional stereotypes can seem almost harmless. In fact, Carrillo calls such stereotypes “one of the unexamined corners of intolerance.”

But dig a little deeper, and the destructive nature of regional bias quickly emerges.

Toni Schmader, a social psychologist at the University of British Columbia, studies the effects of stereotypes on students and teachers. Regional prejudice, Schmader argues, “can be code for race or socioeconomic status, or for a different educational orientation.”

“One hundred years ago, people wore their prejudices on their sleeves,” Schmader says. “But [today] prejudice has gone undercover. People still have biases, but they know they’re not supposed to express them, so they get expressed in other ways.”

Carrillo, from California, describes how this transpires in her classroom: “Our students know it would be frowned upon to make fun of poor people. But it’s okay to say, ‘In the South, everyone lives in a trailer and goes to Wal-Mart.’ It’s a cover for looking at class through a negative lens.”

The effects on students can be no less harmful than other forms of prejudice. Studies have shown that exposure to negative stereotypes can cause students to underperform and can create an “over-praising effect” among teachers, who may withhold critical feedback for fear of appearing biased.

Not surprisingly, one antidote—as Dixson found in Wisconsin—is regular exposure to people from different places. For example, while teaching in Rochester, Minn., where families came from many regional and even national backgrounds, Schwartz found students to be more inclined to accept differences. Now, teaching in a school with a more homogeneous population, Schwarz has encountered stereotypes that have been more difficult to break down.

“I worry,” she says, “about students missing out on experiences and interactions and the opportunity to learn about new places and new ideas.” 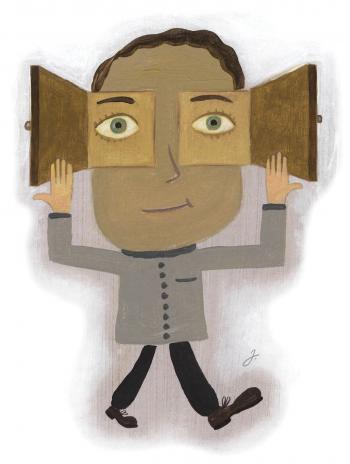 Regardless of where they live, students and teachers say regional biases often come from, or are compounded by, the media. In fact, so many teachers mentioned a certain television program that the phenomenon could be called “the Jersey Shore effect.”

“I used to be proud to answer ‘where are you from?’ with ‘the Jersey shore,’” Grabelle says. Now, “every time I meet a student from New Jersey, we share our woes over the proliferation of stereotypes in reality television about people from our home state.”

Halevy, the teacher in Dallas, grew up in New York City. Because of shows like Jersey Shore and The Sopranos, many of his students think New Jersey is nothing but beach parties and mobsters.

Halevy tries to convince them otherwise. “I say, ‘You go to western New Jersey, and it’s all farmland.’ But they don’t believe it.”

So Halevy asks his students to imagine  teenagers in Afghanistan, watching nothing but MTV and Jerry Springer.

“What would their perception of Americans be?” he asks.

The students think about it. “It would be horrible,” they finally say.

Pam Williams, a speech language pathologist in a rural district in Maine, proves students aren’t the only ones at risk of the Jersey Shore effect: Recently, while driving south, she took an alternate route through inland New Jersey and was surprised to find rolling countryside. Now, whenever she hears adults or kids passing judgment on the state, she tells them about that trip.

She worries most of her students, though, aren’t so lucky.

“Most of our kids live near the poverty level, and their families don’t have the resources to travel,” Williams says. “They have very limited exposure to anything beyond what they see on the television.”

It's a hard thing to counteract. If students get in the habit of stereotyping at all in any one way, it leaves them more ready to stereotype in other ways.

New Jersey certainly isn’t alone—every region, it seems, is the target of someone else’s joke. Yet no region seems to invoke as much bias as the South.

At the Hawken School outside of Cleveland, Andrew Cleminshaw discovered an unintended outcome while teaching Black Boy, Richard Wright’s haunting memoir of his Southern childhood.

“The book played into all the stereotypes they had about the South as this horrible, racist place,” Cleminshaw says. “Many of them had never been to the South and had no idea. They understand the book is historical. But many of them have a sense that while things have gotten better, the tradition continues.”

Documentaries and classroom materials that address the civil rights movement often portray “angry white people doing awful things,” Cleminshaw says, and can overlook the examples of white people, such as Anne and Carl Braden, who were allies in the struggle for civil rights.

“It’s a hard thing to counteract,” Cleminshaw says. “If students get in the habit of stereotyping at all in any one way, it leaves them more ready to stereotype in other ways.”

Part of the trick is to help students separate unfounded stereotypes from authentic regional differences.

Colin Woodard is a foreign correspondent for The Chronicle of Higher Education. In Woodard’s recent book, American Nations: A History of the Eleven Rival Regional Cultures of North America, he investigates the origins of these differences.

“Some of our regional stereotypes,” Woodard says, “actually have historical roots.”

Early settlers in New England, he found, came from densely populated, relatively wealthy areas of the British Isles. In contrast, settlers in Appalachia came from war-torn areas, where there was little rule of law.

Evidence of these histories can been seen today, Woodard argues, everywhere from regional cultural values, to modern-day voting patterns, to why so many technological innovations come from California.

“Regionalism has defined our history to a degree that a lot of people don’t realize,” Woodard says. “A lot of these biases are an outgrowth of that history. Understanding this is important to education, in general, and to fostering tolerance, in particular.”

A student from Adams-Friendship High School summed it up in a final evaluation for the Connections Project: “Though we come from two completely different communities, we Adams kids and Milwaukee students can learn a lot from each other. Plus, we share the same ideas.”

Three Things Teachers Can Do

Check out the that accompanies this story.