Too often, learning in Chelsea A. Jackson’s classroom was a struggle with cheerless chaos. Her 3rd graders at the Title I school in Atlanta struggled to pay attention, and bickering, fussing and general behavior problems frequently interrupted lessons. School-wide, it seemed classroom creativity was frowned upon, teachers felt defeated, and pressure to improve standardized test scores was squeezing the life out of students and teachers. 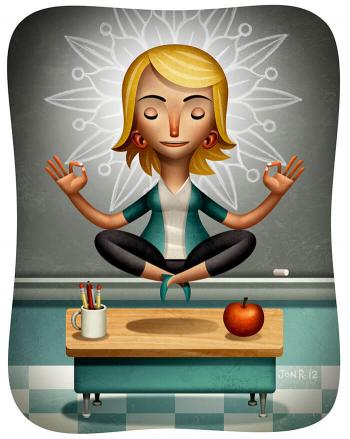 So Jackson took a chance. Personally, she had been turning to yoga to help manage stress, and had found that the practice improved her fitness, attitude and self-confidence. Why couldn’t her students benefit in similar ways? She covered her classroom window with construction paper to reduce distractions. She showed her students how to focus on their breathing. She demonstrated a few simple poses.

Jackson says the effects were better than she had hoped in the weeks that followed. Student attention spans increased. They were resolving their own conflicts. Lessons went more smoothly. She describes how, before standardized testing, her students would request a “few minutes for breath.” And it apparently paid off—though she did not teach to the test, she says her students’ scores were among the school’s highest.

Classroom management has always been a challenge for most teachers. But what if student concentration could be augmented with several calming breaths and a chance to stretch desk-cramped young bodies? That is the question a growing number of schools are exploring by introducing yoga classes and practices into their buildings. And a limited—but growing—body of research indicates yoga for kids may be an effective strategy for proactively managing classroom behavior and efficiently boosting student learning and performance.

Yoga’s history stretches back thousands of years, and its practice has roots in Hindu, Jain and Buddhist religious practices in India and East Asia. It has been described as a discipline for focusing and connecting mind, body and spirit, and has found adoptees among other religions as well as the non-religious. A secularized form that emphasizes fitness and stress-reduction is now well established in Western countries, and one can find a proliferation of yoga studios in most American cities. Studies prove yoga as a regular practice can help lower blood pressure, reduce heart disease, improve strength and balance, and deal with depression and other maladies of mental health.

Jackson is now pursuing her doctorate in education at Emory University, studying yoga integration in the classroom. She and other advocates of yoga for kids point to learning-specific benefits, including:

In other words, yoga offers a potential means to address a wide range of challenges in the classroom.

That has been the experience of Susan Solvang, executive director of K–12 Yoga in Milwaukee. Two years ago, the organization began a pilot program in Cass Street School, bringing in lead and assistant instructors to conduct two classes a week with more than 350 K–8 students. The instructors taught mindful breathing and basic poses, but also modeled calm, respectful behavior. “Students started to be mindful,” Solvang says. “They checked how loud they were speaking or if their tones were harsh in talking to another student. We saw students changing reactive behavior to creative solutions.”

After the first year, the results at Cass Street School were tabulated. Using the U.S. Department of Education’s Positive Behavioral Interventions and Supports, the team calculated disruptive incidents. In the year before the yoga program was introduced, there had been 225 classroom disruptions, 320 disorderly conducts and 150 fights. During the pilot program in 2010–2011, these metrics were all cut by more than half: 110 classroom disruptions, 40 disorderly conducts and 52 fights.

While broad-based evidence of yoga’s potential benefits for students awaits research on a larger scale, limited studies and anecdotal evidence continue to convince educators to give it a chance. And the relatively low cost can often be covered through grants or professional development budgets.

However, school-based yoga is still met by resistance from some parents who believe its roots in Eastern religions mean it should have no place in public schools. Some devout Christians fear it could lead young minds toward other religious beliefs or mysticism. A few districts have banned yoga, as well as visualization practices or meditation instruction.

In some instances, instructors can address concerns by a yoga demonstration sans yogic nomenclature. (One program has removed all yoga references from its “Power Moves Kids Program for Public Schools.”) But if families remain uncomfortable with the practice, they can have their kids sit out the program.

Still, people like Tara Guber, a yoga instructor with more than 25 years of experience, make it their mission to bring legitimacy to yoga in the classroom. In 2002, Guber set out to create a model in-school program, offering yoga three times a week at the Accelerated School in Los Angeles. According to Guber, teachers found that the best time to give an exam was immediately following yoga class, since sessions resulted in calm, relaxed—but focused—students.

Is yoga in the classroom worth the effort? Guber argues that a yoga practice—even once a week—helps students feel safe, show greater acceptance of others’ differences and demonstrate better conflict management among themselves. All that adds up to more time and energy for teaching and learning.