During her 26 years as an award-winning elementary school teacher, Rhonda Thomason took seriously issues of social justice. She confronted racism, gender bias and class issues and stood up for students with special needs. But dealing with matters surrounding perceived sexual orientation and gender identity as it related to students—and the ugly attitudes surrounding these issues—was outside her comfort zone. And the fears of peers and leaders in her Alabama school and community helped keep it that way.

“We didn’t have the experience, resources, tools or policies to help us understand the unique needs of LGBTQ (Lesbian, Gay, Bisexual, Transgender, Queer/Questioning) students or their families,” she says. “I didn’t know how much I didn’t know.”

That began to change for Thomason during a mission trip to Mississippi. A mother told Thomason the story of the persecution her son had endured when he came out. “She was asking me to look at the issue through a social justice lens,” Thomason remembers. “My window of awareness opened, shall we say.”

That window kept opening until Thomason joined others in creating the Alabama Safe Schools Coalition in 2007. Its mission? Supporting LGBT and questioning students in the state and helping schools recognize the value of explicitly including them in anti-bullying policies.

What ARE Safe Schools Coalitions?

Safe schools coalitions (SSCs) exist in many forms across the United States. Some are small, localized and may be focused on a single issue or incident. Others are statewide and even international in scope, like the original Safe Schools Coalition established in Seattle in the late 1980s. All share an essential goal, concisely stated by Safe Schools South Florida: “to create safer schools where all students can learn and thrive, regardless of real or perceived sexual orientation, gender identity or gender expression.”

SSCs attempt to address a span of needs by:

Most SSCs are powered almost wholly by dedicated volunteers—LGBT youth activists and advocates, family members, educators, counselors, scholars and lawyers—who devote hours and days of their time. Coalitions may have vastly different organizational structures depending on their size and goals, but many SSCs link with other groups to bring the necessary resources to bear on a pressing situation or issue.

“This is why the coalition works,” says Anneliese Singh, a professor at The University of Georgia and one of the founders of the Georgia Safe Schools Coalition. “We have the flexibility to get people the specific help they need. This child needs legal help. This parent needs a support group. This counselor needs training. And we do it on something shorter than a shoestring,” she says, commenting on the GSSC’s limited funding.

SSCs in southern states face political, cultural and social challenges idiosyncratic to their region. At the heart of resistance are often conservative social mores and heartfelt Christian values. A lack of experience and contact with out LGBT people also play roles in anti-LGBT sentiment, suggests Thomason.

Activists with the Mississippi, Georgia and many other SSCs recognize the power of personal stories to circumvent this individual and social defensiveness in school communities. As part of their programming, both the MSSC and GSSC organize panels of students that allow educators and school officials to hear firsthand about the hateful speech, bullying and harassment faced daily by LGBT students and those perceived as LGBT.

“Ultimately, our students are the experts,” says Georgia native Maru Gonzalez, another founding member of the GSSC and a former high school counselor in Cobb County, Georgia. “It’s really important to enlist their voices in this conversation. Austin proved this to me.”

Out of all 50 states, Mississippi has the highest percentage of same-sex couples raising children.

—Williams Institute at the UCLA School of Law

Austin is Austin Laufersweiler, who sought out Gonzalez after seeing a Safe Zone sticker in the counseling office. “I was the only out person in my grade of about 500 students,” Lauferweiler says about his junior year. With trepidation, he, Gonzalez and another counselor organized a safe-space training for school staff. When Laufersweiler personally invited a favorite teacher from his freshman year, she pointedly told him that she opposed gay marriage and did not think advocating for gay rights had a place in schools. 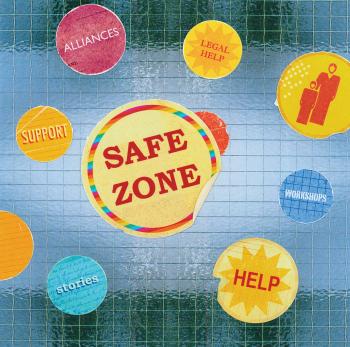 “I said, ‘Slow down. Hold on. I’m not talking about any of that,’” Laufersweiler recalls. “‘We’re not trying to convert anyone. This is about school safety; making the school safer for all kids.’ I explained how this would benefit the school attendance and academic performance, objectives she was concerned with.”

She and some 60 other teachers and staff attended the training. They heard presentations from university professors about research that indicated LGBT-inclusive anti-bullying policies improve overall school safety. Whether or not a targeted student identifies as LGBT, anti-gay language and harassment torments individuals, detracts from their ability to concentrate on academics, triggers fights and poisons school climate.

Laufersweiler’s personal stories of name-calling and emotional and physical intimidation starting in fifth grade helped translate the theoretical to the real and ugly experiences faced by students. They disarmed his former teacher as well. “She came up to me afterward, crying,” Laufersweiler says. “And she says, ‘I had no idea what you and other students go through.’” Attendees walked out with some 40 Safe Zone stickers for their classroom doors, and organizers had to order more.

For educators in conservative districts, confronting anti-LGBT behaviors and attitudes requires courage. Some states offer little to no job protection, and fears of disapproving parents, colleagues and administrators can impose a code of silence that reinforces the isolation felt by intimidated, ostracized students.

Backed by their coalitions, though, safe-schools activists like Gonzalez are now less willing to cave to implicit community pressure. “I think a lot of educators don’t know their rights,” she says. “Schools are legally required to protect all students, and as a counselor I have a responsibility to students’ well-being.”

A school that is safer for LGBT students is a safer school for everyone, and that’s what safe schools coalitions are fighting for. It’s an objective every educator can rally to—wherever they teach, whatever their personal attitudes and beliefs.

Our thanks to Sarah Young and Christopher Rapisarda for their background research for this story.