Is My School Racist?

Institutional racism can be hard to spot. Try our strategies for sniffing it out.
Brian Willoughby
Issue 45, Fall 2013
Illustration by Peter Horvath
Teach This in a Learning Plan
X
Add to an Existing Learning Plan
START A NEW LEARNING PLAN
Bookmark Is My School Racist?
Print

Sometimes it's obvious. In Wilcox County, Ga.—where proms historically have been privately funded and casually labeled “black prom” and “white prom”—efforts to bring black and white students together for the biggest dance of their high school career raised both awareness and long-simmering tensions. Some 30 years after desegregation, Georgia Gov. Nathan Deal, in an email sent to the media by his spokesperson, labeled these efforts toward integration a “silly publicity stunt.”

Long-standing and long-accepted patterns mean harsher discipline for students of color compared with their white counterparts—in every region of the United States. Expectations are lowered for students on the bottom of the achievement gap.

Institutional racism exists throughout society and our schools—public, private, small, large, mono- or multicultural. None is immune to it.

“It can happen at the classroom level, the administrative level or the district level,” says Matthew Lynch, chair and associate professor of education at Langston University in Langston, Okla. “It involves academic achievement, patterns of discipline, professional development—or the lack of it. Really, it can affect almost any aspect of the K-12 experience.”

So the question arises:
Is my school racist?

There’s no one-size-fits-all response to that question, no magic checklist or formula to answer it or, more important, to bring about needed change. But some approaches to identifying and mounting a response to institutional racism in schools are increasingly accepted as best practices.

Mica Pollock, editor of Everyday Antiracism: Getting Real About Race in School, calls on educators to develop an “everyday consciousness” about the relevance of race in schools. Be aware, ask questions and “keep inquiring,” says Pollock, who is the director of the Center for Research on Educational Equity, Assessment and Teaching Excellence at the University of California, San Diego.

Pollock offers four questions as a starting point for assessing and addressing institutional racism in a school setting:

And then, when considering such actions, Pollock urges educators to ask the following:

Is this action moving students closer to educational opportunity or farther away from it? Why? What is our evidence?

Lynch, who spent seven years himself as a K-12 educator, seizes on that final word: evidence. In an increasingly data-driven world, evidence is essential.

“People jump the gun,” he says. “They say discrimination is happening based on ‘a feeling I have.’ Well, that doesn’t cut it in the modern world.”

Gut feelings may be right, but they also may be wrong.

“I’d need a thousand hands to count the number of times my feeling has been wrong,” Lynch says. “If you feel it, start working to prove it.”

How do you do that? Lynch offers three vital steps:

“Don’t start by saying someone or something is racist; that’s too loaded, a powder keg waiting to explode,” he says. “Start by saying, ‘Maybe there’s a problem here. Let’s look into it.’”

In trying to balance the need to address both individual and institutional racism, Paul Marcus of Community Change Inc. in Boston offers an oft-told story:

Someone notices a baby floating in a river. Then another. And another. The person calls for help, jumps into the river and starts pulling babies to safety. More and more babies flow downstream, and people continue to pull them from the river—except one person who takes off at a run, heading upstream to see who or what is throwing babies into the river in the first place and what might be done about that.

“We focus on saving the babies, on individuals rather than on systems,” Marcus says.

Consider discipline. Tomorrow, if you are disciplining a student, ask yourself whether the disciplinary method you are choosing moves the child closer to educational opportunities or farther away from such opportunities. Ask yourself what that means for the student, then adjust your choice of discipline so that it continues to encourage learning rather than pushing the student out of the classroom.

Look critically at the posters hanging in your classroom tomorrow. Who is represented, and who isn’t? What messages might you inadvertently be sending? What posters might you add or remove? The “try tomorrow” phrase also can be used to help focus the efforts of others. If a colleague comes to you voicing frustration about some issue tied to structural racism, help bring it down to a manageable level by saying, “It feels overwhelming, doesn’t it? We can’t do everything, but we can do something. What can you try tomorrow?” 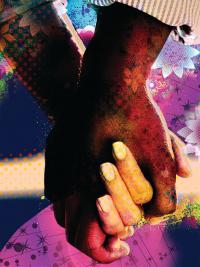 Paul Marcus doesn’t like the term institutional racism. He finds it too narrow, as if racial oppression exists in a single institution—or in a single place within that institution.

Marcus is the executive director of Community Change Inc. in Boston, a group that has been working on racial equity issues for 45 years. He prefers the terms structural racism and systemic racism, which reflect layers of historical oppression. Before we can effectively tackle structural racism in schools, Marcus says, we need to take a step back to get a broader view.

He identifies four overlapping dimensions of racism that need to be examined in an effort to challenge and eventually eliminate structural racism:

“The vast majority of people understand racism only on the first two levels,” Marcus says. “Internal: who we are, what we think and believe, how and where we were raised. And interpersonal: how we interact or don’t interact.”

Marcus believes that’s why we embrace stories of individual heroes—the daring and dedicated educator battling racism to make a dramatic change for a student or classroom or athletic team. Such heroism matters, Marcus says, but if that’s the only view we take, we will miss the larger issue—the final two dimensions in his list: institutional and cultural.

First turn to history. Between 1933 and 1964, Marcus says, 98.6 percent of the $120 billion available in FHA loans for homebuyers went to white people. What is the impact and legacy of that one inequity? How would the next generation of a family of color have been changed if the parents could have purchased a house using that money? And the next? What opportunities might have been gained?

The same phenomenon, but in reverse, often happens with advanced placement classes. Standardized tests consistently result in race-based score discrepancies, and those same tests are a significant criterion used to place students in advanced classes. What does that mean for students’ academic success—and for their futures?

Or examine how schools are funded—which areas have perennially underfunded schools and which don’t—and what that means for student outcomes and lives.

Or consider schools within schools. Does a predominantly white internal baccalaureate program exist within a school where students of color are the majority? What message does that send? How does it change how even well-meaning members of the community view educational abilities?

All of this didn’t just happen. We, as a society, created it, Marcus says.

“Whiteness and blackness aren’t important unless someone has said they are,” he says. “Race isn’t any more real than blond hair or red hair. The meaning comes out of history, out of what we have done with race.”

Marcus acknowledges that such a view can be daunting and can make the task of responding to school-based systemic or structural racism seem impossible. The power, he says, is when more and more people work to dismantle the system of oppression.

He recalls a conversation he had with an educator in South Africa during the apartheid period. “I asked her how she kept from getting overwhelmed, and she asked me if I was familiar with the game of pick-up sticks,” Marcus says. “‘Well,’ she told me, ‘you just grab one stick and shake it as hard as you can.’”

Assess your school climate with these “try tomorrows."