As the nation celebrates the bicentennial of the Lewis and Clark Expedition, educators across the country should be asking what one Oregon teacher does: 'Is this a celebration for Native Americans?'
Ken Olson
Issue 29, Spring 2006
Bookmarked 21 times
Illustration by Shino Arihara
Add to a Learning Plan
X
Add to an Existing Learning Plan
START A NEW LEARNING PLAN
All articles from this issue
Print

The Corps of 'Discovery'

Meriwether Lewis and William Clark began preparing for their historic journey in 1803 and officially launched the expedition in May 1804. They traveled more than 7,400 miles before returning to St. Louis on September 23, 1806. Besides the two leaders, the permanent crew included 27 soldiers and four civilians -- Clark's slave York, Sacagawea, her infant son Jean Baptiste Charbonneau, and her husband, Toussaint Charbonneau. The expedition crossed the homeland of more than 100 distinct Native American tribes.

"As a school boy, you probably thought of Lewis and Clark chopping their way through a jungle," Marilyn Hudson says as we survey the gentle hills and winding cottonwood coulees of her Mandan-Hidatsa homeland in central North Dakota. "But they were on well-traveled trails. Our tribe drew them maps and told them, 'This is how you go up the Missouri (River) to the Great Falls.' They were given very specific directions."

We're standing on a grassy bluff called Indian Hills, more than 100 feet above the place Lewis and Clark camped on April 11, 1805. But 200 years later, we cannot see their historic campsite; it was buried by a 20th century reservoir, much as the Native American perspective on and contribution to the Lewis and Clark expedition is buried by ignorance and arrogance.

That's an apt metaphor on this bicentennial of the 1803-1806 Lewis and Clark expedition, a time when lessons of Lewis and Clark will gain greater emphasis in classrooms across the country.

"A dismaying amount of our history has been written without regard to the Indians," writer and historian Bernard DeVoto observed more than 50 years ago.

Such disregard is glaring in many mainstream stories of Lewis and Clark.

"They wouldn't have made it if we hadn't been here to show them how to hunt and what wood to chop," Hudson's granddaughter, Cassi Rench, says of the Mandan's critical role in Lewis and Clark surviving the 45-below days of the winter of 1804-05.

"It was two men -- two men who encountered at least 48 different tribes," adds educator Judy BlueHorse of Portland, Ore. "And yet it's always a story about these two men."

In Recovery from 'Discovery' 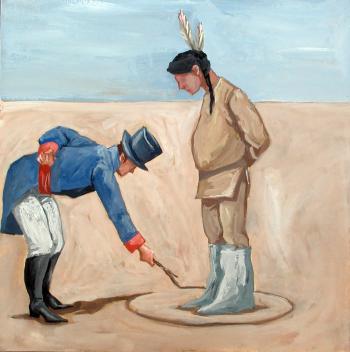 Dazzled by the notion of Manifest Destiny, American history tends to eulogize what Lewis and Clark "found" on their 7,400-mile journey. For Native Americans, the story instead is about what was lost -- lives, land, languages and freedom.

"Within 100 years of Lewis and Clark passing through here, every Native nation they encountered was displaced from their traditional lands and put on reservations," says BlueHorse, who works in the Indian Education Program for Portland Public Schools. "The ancient forests were clear cut. The great buffalo herds that fed (the expedition) were reduced to fewer than 300 animals, and the last Oregon sea otter, whose highly prized pelts had helped fuel (President Thomas) Jefferson's mission, was gone."

Pacific salmon, which the Nez Perce Indians fed the starving expedition in northern Idaho, continue to struggle for survival against lethal changes wrought by the dam-and-reservoir landscape. These same reservoirs drowned the most important Native American fishing sites and many sacred sites.

"I think continuing to glorify exploitation as exploration is dangerous," says BlueHorse, who is Nez Perce, Chickasaw and Cherokee. "We're in recovery from 'discovery.'"

"In the European view, 'discovery' means taking over the land," Hudson says. "They were a military expedition."

"To imply the land is empty or untrammeled is to miss the fact that there were civilizations here that existed longer than the civilizations that came over," Bluehorse adds. "We were not just running around nomadically eking out a living. The items from our daily lives are in museums for their beauty and for the values they reveal about Native cultures."

Indeed, when the Lewis and Clark expedition arrived at the Mandan villages along the Missouri River in the late fall of 1804, these Native Americans were the hub of a trade network that stretched north to Hudson Bay in modern-day Canada, south into Latin America and included Spanish, French and British trappers and traders. President Jefferson knew this when he dispatched the Lewis and Clark expedition. Jefferson wanted to edge other countries out of the lucrative fur trade and begin shoving Native Americans aside for the coming westward expansion.

"Our family didn't really talk about it," Marilyn Hudson says. "I was told nothing in school. There was nothing about their relationship with our tribe" -- even though one of Lewis and Clark's campsites lies not very far from where Hudson grew up.

Hudson points toward an indiscernible spot on the vast blue waters of Lake Sakakawega to indicate the approximate location of the tree-lined streets of the Native American community of Elbowoods, drowned after the U.S. Army Corps of Engineers completed Garrison Dam in the early 1950s.

"We rode horses and roamed all around there," she says of the winding river valley that provided shelter from the punishing winds of the Great Plains and nurtured Mandan and Hidatsa corn, bean and squash crops long before European Americans trudged onto the scene.

Native Americans were inundated with more pressing matters than memorializing the explorers. Lewis and Clark's historic visit triggered a wave of European American migrants who brought vicious epidemics that so devastated the Mandan, Hidatsa and Arikara that the three tribes joined forces in order to survive on the Fort Berthold Reservation, less than 100 miles from the Canadian border. Forced assimilation, culture-purging boarding schools and repeated assaults on Native American land followed.

Plenty of other misconceptions also linger, including the idea that Native Americans have largely vanished.

"So many people think we're gone," Hudson says as we leave the reservoir, cruising past pastoral alfalfa and wheat fields on the 1804 Road, following the same route Lewis and Clark traversed across this land of limitless sky and endless horizon in 1804.

"We want people to know that the Mandan, Hidatsa and Arikara people are still here," Hudson says. "We are still contributing to society, growing stronger in numbers and are an independent, sovereign nation." 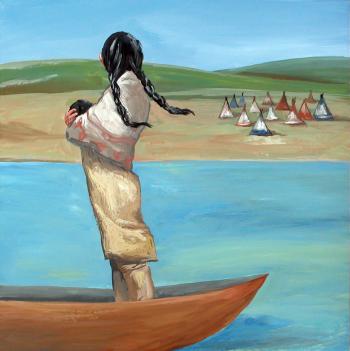 Native Americans also didn't understand some of the most significant messages Lewis and Clark delivered.

"When you read the journals of Lewis and Clark, you realize how ignorant they were of Indian beliefs and customs," says Theresa Schenck, Native American studies professor at the University of Wisconsin and a member of the Blackfeet Tribe. "Most Indians did not understand, 'You have a great white father in Washington, (and) we declare sovereignty over you,' because they had no word for sovereignty and no concept of control by a higher authority."

So Native Americans listened to the explorers' speech -- and ignored it.

In the end, people cannot understand the Lewis and Clark expedition if they don't understand the spectrum of Native American cultural practices, Schenck says. And these different perspectives need to be taught long after the bicentennial of the expedition fades from billboards and travel brochures.

"Historical events of this magnitude should not be forgotten," Schenck says. "The consequences of the expedition resonate year after year."

There is not a single, unified Native American view of Lewis and Clark.

"There are many American Indian perspectives," Schenck says. "Even within a given tribe, there are many different attitudes."

Consider the expedition's famous female member, Sacagawea, who joined the group after Lewis and Clark hired her husband, Toussaint Charbonneau, as a guide that first winter in North Dakota.

The Lemhi-Shoshone spell her name Sacajawea and consider her a native Shoshoni who was captured by the Hidatsa, neighbors of the Mandan, and later sold to Charbonneau.

The Hidatsa, conversely, spell her name Sakakawea and consider her a native of their tribe. Hidatsa oral history says Sakakawea was captured by the Shoshoni but eventually escaped and returned to her people in what is now North Dakota.

"We tell people it's incumbent upon them to go out and do as much research as they can and come to their own conclusion," says Hudson, who today is administrator of the Three Tribes (Mandan, Hidatsa and Arikara) Museum in New Town, N.D.

"It's like a diamond," Schenck says of this and other varying Native American views of the Lewis and Clark expedition. "Every side has a different facet. Every facet contributes to the beauty of the whole diamond."