A small Catholic school and its students grapple with life and learning in the shadow of two nations.
Carrie Kilman
Issue 29, Spring 2006
Bookmarked 6 times
Photography by Valerie Downes
Add to a Learning Plan
X
Add to an Existing Learning Plan
START A NEW LEARNING PLAN
All articles from this issue
Print

Drive south from Tucson on I-19, and watch as the pink stucco houses, the turquoise-colored strip malls and the boulevards lined with palm trees give way to mountains. Listen as the wind blows through the canyadas, the small valleys between the rolling hills.

Snaking southward, the highway ends in Nogales, a desert mountain town straddling the line that separates Arizona from the Mexican state of Sonora. On the side of a hill in the heart of Nogales stands Lourdes Catholic School. A wrought-iron fence hems in the campus; it was added last summer to protect the students from coyotes -- the human smugglers of drugs and people. From Lourdes' parking lot, you can see Nogales' sister city, Nogales, Sonora, and the line between them, drawn in steel and guarded at checkpoints by border agents with guns. 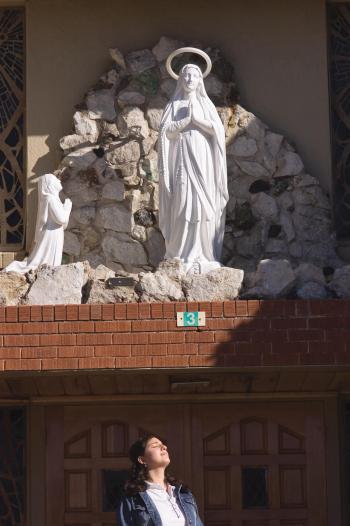 Though Lourdes' address is in Arizona, 60 percent of its students live in Mexico. To fit the customs and languages of two countries into one school, Lourdes has adopted the spirit and method of biculturalism. It helps teachers here address the unique circumstances of teaching in a place where two cultures blend to the point of almost becoming one.

Estefania Rivas will tell you she's just a typical 8th-grader. She loves Harry Potter and The Lord of the Rings, pores through every issue of Teen People, and, while she thinks about college, she'd rather be talking with friends about boys. She almost always wears a denim jacket with a fake-fur-lined collar and prefers "normal clothes" to the uniforms at school.

Estefania is one of 424 students, pre-K through 12th grade, who attend Lourdes. She and her younger siblings live with their parents in a middle-class neighborhood near the center of Nogales, Sonora. They attend Lourdes on education visas from the U.S. government, which allow them to cross the border each day for school.

Every morning, Estefania's parents, Luis and Gissy, check the local television station that broadcasts constant video of the cars waiting to cross the border. The longer the lines, the earlier the family leaves. During the holiday season, they're out the door by 6 a.m.

Today, it's Luis Rivas' turn to drive carpool. Two students wait at the top of a hill. "¿Tienes papeles?" he asks. (Do you have your papers?) Around them, the hills rise into mountains, the jagged horizon dotted with the cardboard shacks of maquila workers. Below, the pink and yellow houses of Nogales' middle and upper classes fill the valley like a candy bowl.

Five lanes of traffic, each at least 15 cars deep, greet them at the border. Men selling food, candy and CDs wander between the cars. Spanish-language music filters out of an open car window, mingling with the sweet scent of freshly grilled corn.

Finally, it's the Rivas family's turn. Estefania's 6-year-old sister, Valeria, stops clowning in the backseat, her face frozen and serious. As a border patrol agent leans through the window, the children hold open their passports. The guards ask the same questions every day: Where are you coming from? Why were you there? Where are you going?

Fifteen minutes later, the minivan joins the line of more than 200 cars, winding through Lourdes' protective gates and up the drive to deliver their children.

The campus consists of dozens of red brick classrooms connected by breezeways, courtyards and outdoor walkways. The school's design brings the outside in: Instead of grubby hands and pencil erasers, classrooms here smell of desert air and flower blossoms.

Painted to the side of the elementary wing is a mural: red, orange, yellow and green, with big, hand-drawn words that say, "Peace y Bienvenidos." Peace and Welcome. All around the school hang signs that read, "We are Bilingual and Bicultural."

"It is natural," says Lupita Heredia, Lourdes' dean of students. "It is who we are."

Two flags -- one Mexican, one American -- hang on a wall in every classroom. 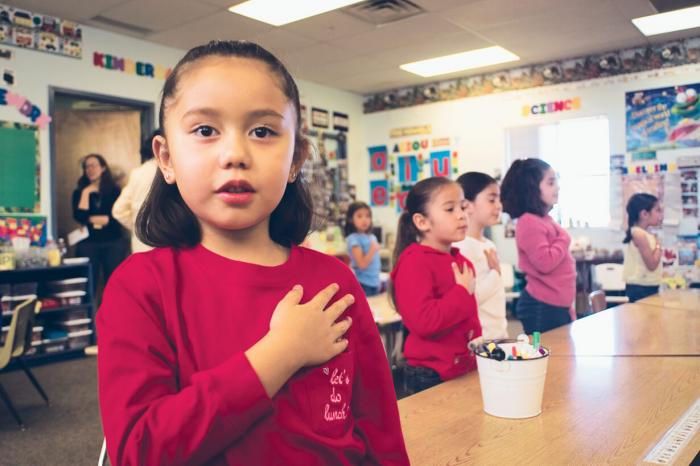 In the kindergarten room, Valeria and her classmates press their palms to their hearts and strain to hit the high notes of The Star-Spangled Banner, as a small boy at the front of the room solemnly holds an American flag. After a pause -- and a flag switch -- students raise their straightened right arms for the Mexican national anthem.

Beginning in 1st grade, classes here are taught in English, though Spanish remains a required subject, just like math or history. All day, students and some teachers speak in streams of half-English, half-Spanish. Through the open door of a classroom, you can hear Ms. Torrey calling, "OK, diez minutos -- ten minutes!"

Lourdes is governed by the Minim Daughters of Mary Immaculate. The order was founded in 1886 in Guanajuato, Mexico. In 1926, at the height of the Mexican government's persecution of Catholic priests and laypeople, 24 members of the order escaped to the United States and settled in Nogales. They purchased a plot of land for $10 and lived there in barracks donated by the U.S. Army.

But Lourdes' proximity to the border, especially in post-9/11 America, presents challenges uncommon to most U.S. schools.

Tuition, which is set by the diocese, runs from $2,160 for elementary students to $3,300 for high school. Students from Mexico also must pay for passports, immigration papers and U.S. education visas -- a cost of about $270 per pupil.

Last spring, the school found out that the United States would no longer grant education visas to pre-kindergarten students. With no pre-K students coming from Mexico, Lourdes almost canceled the grade.

The year before, Lourdes discontinued its summer English-language program, which attracted non-Lourdes students from both sides of the border, because it became too expensive for Mexican families after U.S. officials began requiring visas for summer school.

"Sometimes I wonder," says Sister Barbara. "The government makes it harder and harder to help each other."

Estefania -- or "Stef," as friends call her -- shucks her denim jacket on the lunch table. Her friends follow close behind, as the sound of silverware scraping against plastic trays echoes off cinderblock walls. 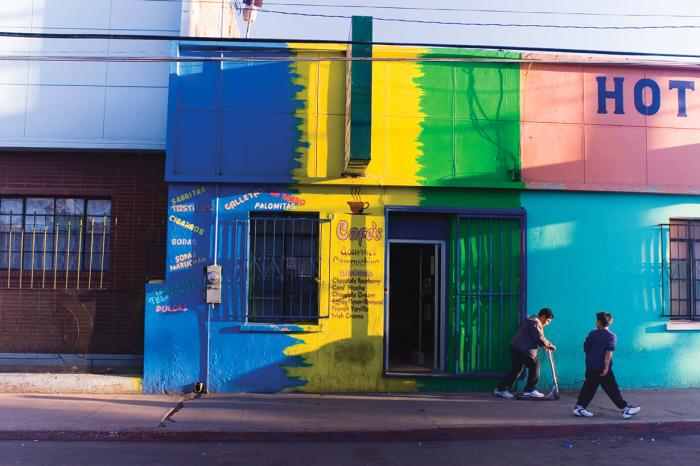 Today, they are talking about movies. The conversation meanders, in typical 14-year-old fashion, from favorite actors (Estefania's -- this year, at least -- is Brad Pitt) to the American television show, "One Tree Hill."

Across the room, at a table of 7th-graders, Alexandra, Clarisa and Gabby lean over their applesauce cups and continue an impassioned discussion from their religion class; earlier in the week, the class had discussed the meaning of borders.

"I don't understand why the wall is there," Alexandra says. "We are one people."

"I know -- you don't have to be limited by flags," Clarisa jumps in. "I think it would make us more united, as a world, if we all knew about each other's cultures."

Later, Sister Barbara will say the border "is just a gate the kids have to go through in the course of their daily lives."

For these students, it's more. 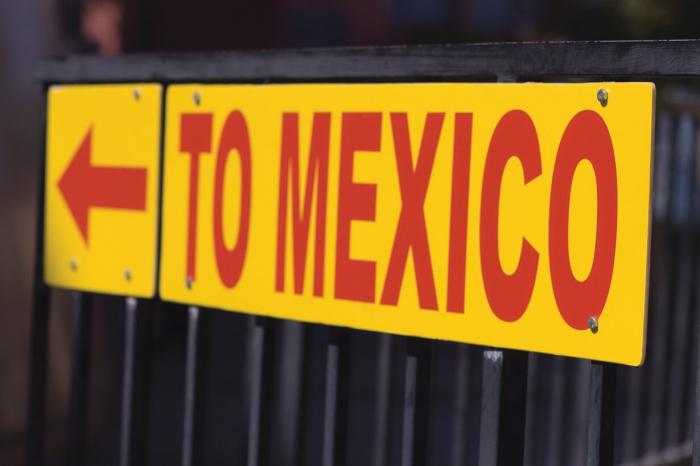 "Sometimes when I'm crossing the border," Gabby says, "I hold my breath and I think, 'Oh! Now I'm Mexican ... and now I'm American."

Turn on the evening news or head down to the local diner, and you'll likely hear some mention of immigration.

From the English-only laws that have passed or are pending in at least 28 states, including Arizona, to the vigilantes who patrolled the Arizona border last year, national borders and the people who cross them incite the most fervent political disputes.

"We realized that all the road signs these days point to war," Mason says. "So we thought, 'Wouldn't it be nice for these signs to point to peace?'"

Of the faithful
The afternoon sun beats down as the Rivas' car exits the gate at the end of the driveway. Soon after, they cross the line with ease -- no one asks questions if you're heading in this direction.

Luis and Gissy Rivas send their children to Lourdes because it's the best education they can afford, even though they spend more than half of their income on school-related expenses.

Their children are lucky: The alternative might be one of the public schools in Nogales, Sonora, which often have no windows, no air-conditioning and no water in the bathrooms. Private schools there are a little better, but the overworked teachers regularly are assigned to two or three different campuses.

Crossing the border each day becomes routine, Gissy Rivas says, but it also is fraught with reminders. "You see the differences (between Sonora and Arizona) and you remember the stereotypes Americans can have," she says. "That we are lazy. That we are dirty. That we like to steal. That we don't have good education, good manners. But that's not us. That's not who we are."

The Rivas family knows what people on the border always know: Even if the wall is everywhere, it also is arbitrary. Culture is fluid, unconstrained by lines on a map. The language of one. The laws of another. The religion of both. Technically this side of the wall is the United States. But it isn't. It isn't quite Mexico, either.

As the family's minivan rumbles past the checkpoint, Estefania looks up and says with 14-year-old clarity, "In the future, I think, maybe we will have a better world. We're people, right? We're all people."

The Wall Is Everywhere

You see it from the school yard, the bank, the Burger King. It's a patchwork of metal, made from scrap parts left over from Desert Storm. See the barbed wire rising from its top; notice how it slices the hillside like a long, black scar. Then, from the Mexican side, see the sea of white crosses nailed to the wall, each one tagged with the name of a person who died trying to cross to the other side. Read the graffiti that pleads, "No Human Is Illegal."

"I don't think Nogales, Ariz., would survive without Nogales, Sonora, and the other way around," Lourdes staff member Margarita Varela will tell you. "Both sides, they need each other."

If you stand at either of the two checkpoints long enough, you'll see what she means. You'll see the produce trucks rumbling north from Mexico, delivering their goods to the distribution companies in Nogales, Ariz. And you'll notice the workers pouring into U.S.-owned factories located just south of the border wall, the maquilas that recruit low-wage workers from Mexican villages and lure them to the border towns. The relationship is relentlessly interdependent, if not always equitable.

The people here have a term for it, a term you'll hear more than once if you walk through the streets, stop at a corner store for a sweaty can of soda, or pause in a doorway to find respite from the sun: