‘Conversion therapy’ poses as a medical treatment—but it’s really a type of bullying. Know what it is and how to help when LGBT students are told to ‘pray away the gay.’
Sean Price
Issue 42, Fall 2012
Bookmarked 2 times
Illustration by Keith Negley
Add to a Learning Plan
X
Add to an Existing Learning Plan
START A NEW LEARNING PLAN
All articles from this issue
Print

At age 14, John Johnson (not his real name) came out to his parents after one of several suicide attempts. His father, a conservative Roman Catholic from a military background, was especially upset to find out that his son was gay.  He cornered John in their Houston home and beat him, breaking his leg and sending him to the hospital. John ran away to stay with  friends. His mother found him and convinced him to return home. However, his parents insisted that he begin conversion therapy. 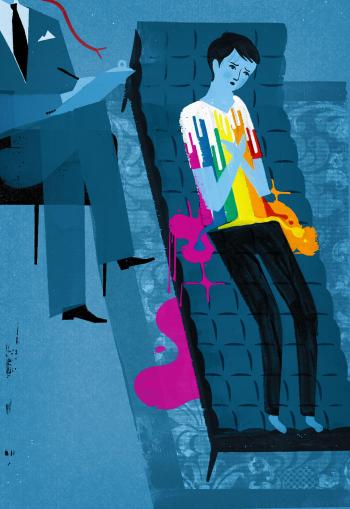 Conversion therapy comes in many forms, ranging from informal chats with counselors to aggressive physical coercion, but all are based on the belief that a gay male or a lesbian can be changed “back” to heterosexual behavior. It isn’t just alarmed parents who turn to this therapy. Many LGBT individuals seek out such treatment in an effort to leave behind the social stigma of homosexuality.

Supporters of conversion therapy frequently try to get their message into classrooms. Thus, it’s important that educators know more about them and their cause. Wayne Besen of Truth Wins Out, a group that combats anti-LGBT extremism, points out that educators are among those most likely to deal intimately with teenagers like John who are going through conversion therapy. “As long as people are made to feel ashamed for who they are, these groups will exist,” Besen says.

Not Just for Christians

Conversion therapy goes by many names, including ex-gay therapy, reparative therapy and reorientation therapy. Whatever it’s called, the treatment is based on the belief that homosexuals are actually heterosexuals in denial. Most advocates of conversion therapy believe that gay men and lesbians have psychological issues, and that if those issues are addressed properly in therapy a straight life is possible. “‘Gay’ is a self-chosen identity,” says the website of Parents and Friends of Ex-Gays and Gays, or PFOX.

But conversion therapy has no grounding in mainstream medicine. It is a pseudoscience—junk science. That’s why it has been condemned by such groups as the American Psychological Association (APA) and the American Medical Association (AMA). Dr. Jack Drescher, a New York psychiatrist who has written extensively about the conversion therapy movement, says that most of its practitioners are religious counselors. Many of them are unlicensed and all base their treatment on theories that are scientifically unsound. Drescher says that there is a popular belief, for example, that parents cause children to be homosexual.

As part of the treatment, conversion therapists also bombard patients with anti-gay and anti-lesbian stereotypes—that homosexuality is a grim, dead-end lifestyle; gay men are doomed to die of AIDS; lesbians just need to get in touch with their feminine side; all homosexuality leads to unhappiness and despair, Drescher says. “It’s like a concentrated burst of homophobia.”

As long as people are made to feel ashamed for who they are, these groups will exist.

For John, conversion therapy began at about age 14 and did not let up until he was 20. At first, the sessions were helpful in some respects. He was a troubled young man with a drug problem in addition to dealing with his family’s contempt for his sexual identity. John’s first conversion-therapy counselor listened to him and helped him work through some of those issues.

However, that counselor’s work did not change John’s sexual identity as his parents wished, so they found another counselor. John says that this pattern repeated itself. “When [counselors] were deemed as not making a change quick enough, my parents would fire them and hire a more stringent practitioner of reparative therapy until it got worse and worse.”

According to John, all of his counselors were evangelical Protestants. “I’d be brainwashed day after day after day, with them telling me about what hell was like and how I was going to be there,” he recalls. “And they began to ‘heal’ my relationship with my parents by trying to prove that my father was distant and my mother was overbearing. They were trying to show that I had this brokenness sexually and they were using my [drug] abuse against me.”

Here are three common arguments made by supporters of conversion therapy and some ways to refute them.

We have testimonials from “ex-gays” that conversion therapy works. Anecdotes are not evidence. There are plenty of “ex-gays” who have renounced their conversions.

You’re just biased against ex-gays. It’s neither wise nor even possible to turn a gay person straight. Conversion therapy is not based on science, and there is no statistical track record that it works. Medical professionals have warned that it can cause depression.

Science doesn’t know what causes sexuality. This is true, but it has no bearing on whether it’s healthy to expose a teenager to conversion therapy. As the American Academy of Pediatrics states, “Therapy directed at specifically changing sexual orientation is contraindicated, since it can provoke guilt and anxiety while having little or no potential for achieving changes in orientation.”

John could not escape conversion therapy, even after he went to college at Texas A&M University, because his parents still paid the bills. Finally, at age 20, he was able to secure his own financial independence. “We didn’t talk for a year after that,” John says. “But finally my father had a stroke. And on what we thought was his deathbed we finally came to grips with each other and forgave each other for what we had done.”

John and others who’ve been through conversion therapy say that teachers can be lifesavers for kids who are dealing with much more than the usual teenage frustrations.  “I think the biggest thing that a teacher can do is just to be there for the student,” he says, “for them to say, ‘If there’s ever something I can do—if you need [time] during lunch—then let’s sit down and talk.’”

That may be easier said than done, however. Students dealing with conversion therapy may also have other secrets. For example, some may be dealing with legal issues, such as physical abuse, that teachers are obligated to report. “It’s really difficult,” John says, because teachers then have to decide whether “to inform the parents about the issues that these children are having,” ignore the situation or try “to help the child by being a mentor to them.”

John’s friend Charles Banta found that one teacher helped both by listening and by being a good role model. Growing up in the small town of Wheatland, Iowa, Charles was 15 when he began conversion therapy. Charles’ religious parents had always been vocally anti-gay, so he desperately hoped the treatment would work. However, that feeling changed completely after meeting some of his band director’s gay friends. “I saw these successful older gay people just living their lives,” said Charles, who is now 19. “And at that point I started to wonder if I could just live being gay.”

But, says Charles, a teacher doesn’t need to be gay, lesbian or bi to be a good role model. Also, small gestures can mean a lot. His English and history teachers allowed him to write freely on LGBT topics, something that helped boost his confidence. He agrees with John that just lending an ear to a student who’s in conversion therapy might save a life.

Having a strong LGBT community at school helps a lot too. However, most schools aren’t there yet. “I just went back to my school a couple weeks ago during spring break and encouraged them to put up Safe Zone signs,” Charles says. “If anyone had been willing to display that sign [when I was in school,] it would have given me a little more courage to go and talk about it.”

John says that he now enjoys a fragile peace with his family. He has joined the Marine Corps and built a strong group of friends. “What finally made me overcome [the trauma caused by the years of conversion therapy] was a very close friendship that I had at A&M and in the military,” John says. This friend “was able to see me for who I was, even though I never actually told him that I was gay until about a year ago, when Don’t Ask, Don’t Tell was repealed.”

Today, John is committed to educating people about conversion therapy. “This is my cause,” he says. John believes that parents and educators need to know about the dangers of conversion therapy. But, he adds, it’s even more vital to reach out to teens who are facing the same darkness that he escaped. “It’s all about giving them the hope that life will get better sooner or later.”

Supporters of conversion therapy like to present their programs to schools as a kind of antibullying measure. PFOX President Greg Quinlan says that his group’s flyers urge “tolerance for all”—especially ex-gays. He also says that “PFOX has distributed informative flyers in some of the largest school districts in the country.”

Last February, a high school in Montgomery County, Md., became the target of a PFOX leafleting campaign. PFOX took advantage of the district’s policy allowing nonprofit groups to send flyers home  with students. Many students and parents were outraged by flyers saying, among other things, that people can choose to be heterosexual. “If only one part of you has gay feelings, should your whole life be gay identified?” the flyer asked.

School administrators might be tempted to ban distribution of these types of flyers, but such efforts can often backfire by giving ex-gay groups and conversion therapists an excuse to claim that their free speech rights have been violated. That’s why the Southern Poverty Law Center urges educators, parents and community members to counter the false propaganda with the most powerful tool at their disposal: facts.

In the Montgomery County schools case, Superintendent Joshua Starr wasted no time in calling the flyers “reprehensible and deplorable.” Local groups partnered with Teaching Tolerance to put out a flyer explaining the disturbing truth about conversion therapy and offering resources to educators looking to offer an inclusive environment for all students—straight and LGBT alike.