The Hierarchy of Hate in School

Whether looking at news media reports or reading educator stories, it’s clear that hate and bias are national, not regional, issues. We saw both media and educator reports from all 50 states and Washington, D.C., in 2018. 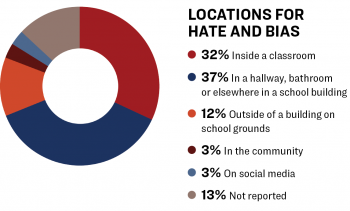 Within schools, hate and bias aren’t limited to one location in a building. Most of the incidents that educators reported took place on school grounds, with nearly a third happening inside the classroom, presumably in full view of teachers. Few educators see hate and bias incidents on social media, but social media—videos, posts, chats and screenshots—are often at the center of the stories that get reported on the news.

Most incidents of hate and bias happen at the secondary level, in middle and high school. In elementary school, students tend to stay with the same group, often in the same classroom, and work closely with a small number of adults. Most elementary schools emphasize socialization and learning to get along. In secondary schools, adolescents are trying out new identities, changing classes and teachers, and vying for attention and peer approval. They are also more active online, where ugly content gets amplified and it’s easy to fall into a cesspool of hate.

In this study, we catalogued the types of bias incidents reported by teachers. We found that racial and ethnic bias were the most common, followed by incidents motivated by bias against the LGBTQ community, immigrants, Jews, Muslims, and “other.”