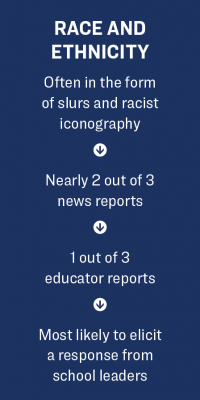 Racial bias—of all sorts—is the most common driver of incidents, making up 33 percent of the number reported by educators and 63 percent of those reported in the news media. Black students are the ones targeted in an overwhelming percentage of these incidents, though Asian students are also singled out. Teachers also reported a handful of incidents involving name-calling directed at white people. Racist incidents, often involving slurs, also dominate the news reports. One teacher at a Washington high school described the use of the n-word as “Constant. Everywhere. All the time.” Educators also reported hearing racist, stereotypical tropes referring to black students, such as “darkie,” “cotton picker,” “ape,” “slave” and “monkey.”

Some statements, especially from younger children, may be explained as ignorant repetitions of bias and stereotypes they’re hearing at home. But a significant number of incidents reported by both educators and the news media include deeply disturbing displays of racial animus and white nationalism. In 2018, media outlets reported 25 cases that referenced the Ku Klux Klan and 19 accounts involving nooses in U.S. schools.

Administrators appear to be sensitive to racist incidents and, compared to other episodes of hate and bias, more likely to take them seriously. These episodes are also more likely to result in disciplinary action. According to educators, in 59 percent of racial incidents they saw, someone was disciplined. And administrators are more likely to communicate with families, staff and students when race is involved; in 35 percent of cases reported by educators, school leaders denounced the act and reaffirmed the school’s values. In 25 percent of the incidents, school leaders provided support of some kind to targeted groups.

"I don’t want to sit by you because you’re black."

—Said to an elementary student by classmate ( Educator report, Minnesota)