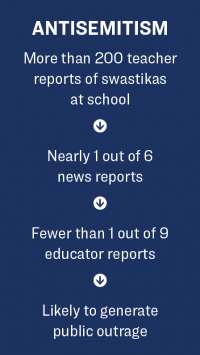 In our tracking of news reports, we noticed an uptick in antisemitic incidents toward the end of the year. A total of 82 were reported in the last three months of 2018 alone.

Antisemitism often came in the form of slurs or hate symbols; 68 percent of incidents reported in the news included swastikas. In our survey, we were told of swastikas scratched into bathroom tiles, carved into desks, painted on parking lots, burned into football fields and inked on skin. Several schools saw photos posted of students aligned in a swastika formation. And educators from two schools—one in Mississippi and one in New Jersey—reported that graduating seniors drew swastikas in the yearbooks of Jewish classmates.

Educators also told us they were hearing jokes about the Holocaust and a resurgence of Holocaust denial from students. Antisemitism was explicitly tied to white-power messaging, as well. For example, a high school teacher in California reported that a student stated, “Jews need to die, and Puerto Ricans should go back to their country.”

"I’m a fan of Hitler! God sent Hitler down to kill the Jews because they nailed Jesus to the cross."