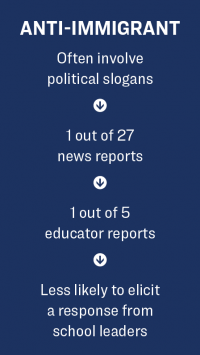 Many educators reported hearing slurs—including some they thought had been long abandoned. While most of the abuse targeted Latinx students, anyone who was “foreign-looking” was subject to being targeted.

The anti-immigrant beliefs expressed by young people closely follow the rhetoric coming from the White House. One Texas elementary school teacher dryly noted that “Mr. Trump’s ‘wall’ has encouraged a series of remarks.”

Compared to other incidents, hate directed toward those perceived to be immigrants in school was less likely to make the news. Educators reported that anti-immigrant incidents they witnessed made the news at a rate of about 2 percent—less than half the average.

These incidents were also less likely to provoke a response from administrators. When confronted with anti-immigrant misbehavior, administrators rarely investigated. And, when immigrants were targeted, few administrators chose to make public statements denouncing the harassment or supporting members of the targeted group.

What Kids Perceived to Be Immigrants Get Told

"Speak English. This is America!"