Thanks to online spaces, bullying has never been easier. Here’s how you can intervene.
Camille Jackson
Issue 29, Spring 2006
Illustration by Whitney Sherman
Teach This in a Learning Plan
X
Add to an Existing Learning Plan
START A NEW LEARNING PLAN
Bookmark e-bully
Print 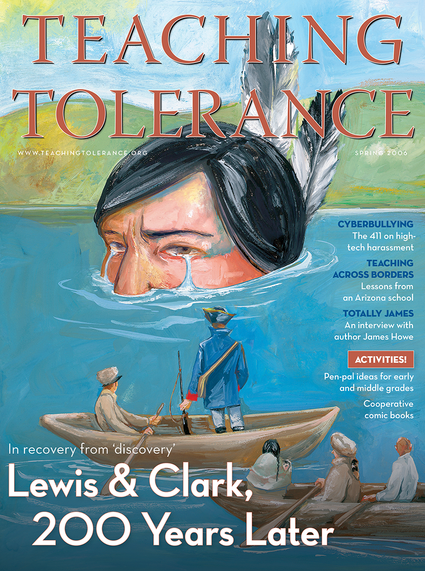 Bullying has never been easier. Any child, operating in relative anonymity on the Internet at any time of day or night, can harass and intimidate peers. Wired Safety.org Teen Angels and other experts offer guidance for teachers and schools struggling with cyberbullying.

A barrage of derogatory comments blasted 13-year-old Megan (for security and privacy, students' first names only are used) each time she signed on to her computer. The hurtful instant messages came from people the New Jersey middle-school student thought were her friends. They blocked her from their buddy lists, summarily excluding her from the group. Megan eventually learned her "ex-best friend" was behind the nastiness, and Megan ended up switching schools.

A supposed friend also was behind a bullying attack on 11-year-old Max of New York. That "friend" stole Max's password, shared it with others, then wreaked havoc on Max's personal computer account. "When I went online one day I saw that the [thief] had deleted all of my buddies. I had about 40," Max said, angry and saddened that he was tricked and his buddy relationships were ruined. "The person who did it was trying to be mean to me."

Not a victim himself, 11-year-old Josh of New York saw firsthand the emotional aftershocks of cyberbullying when a close friend was harassed in a private chatroom. "The other kid started threatening, making remarks and telling lies," Josh said. "It made my friend upset. The next day at school I saw him sitting on a bench crying." 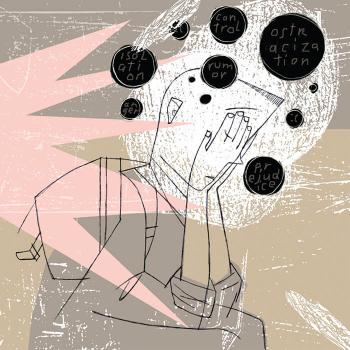 Bullying used to be confined to playgrounds, lunchrooms, and to the school day. Technology allows cyberbullies to harass their victims after school and on weekends. With children spending hours at a time wired to communication devices, they are increasingly vulnerable to aggressive online behavior. Because the bad behavior occurs off-campus, school districts struggle to identify and punish cyberbullies.

Even the notion of "who started it" becomes complex with cyberbullies. As 13-year-old Victoria of New Jersey pointed out, cyberbullies are often people who have been bullied: "They want to be a different person online because they want to feel stronger about themselves."

More children are affected by cyberbullying than initially thought, with some parents and educators none the wiser.

A 2004 study of 1,566 students by i-Safe America, a nonprofit Internet safety group, revealed that nearly 60 percent of 4th- through 8th-graders have had mean or hurtful things said to them online. Nearly a third had been threatened.

The results of another survey, commissioned by the National Center for Missing and Exploited Children (NCMEC) and Cox Communications last spring, shows that nearly half of parents surveyed do not have or do not know about monitoring software or their kids' online activities. They don't check email content, buddy lists, chatrooms or instant messages. Fifty-seven percent of parents are unfamiliar with common chat lingo like BRB (be right back) or LOL (laughing out loud).

Derek Rangel, a parenting consultant and founder of StoppingSchoolViolence.com, said sometimes kids are embarrassed about being bullied and think they can handle it alone.

"A lot of kids don't tell parents because that's a double penalty; parents will take away the phone or computer privileges," he said. Rangel urges adults to discuss cyberbullying with children "before it becomes a problem, because then it will be easier to handle."

How can adults protect kids from bullies online when they don't even know the language? More important, if online bullying is so common, why don't parents just pull the plug?

Because cyberbullies do not have to confront their victims directly, they may feel emboldened and uninhibited, making their messages more vicious than they would be in a personal confrontation.

'A Lot More the School Can Do'

At first Parry Aftab, a lawyer and cyber crime expert, didn't get it. Why don't kids, as she says, "slowly back away from the computer" when someone sends a nasty message?

Then she talked to students in her Wired Safety.org Teen Angels program and realized pre-adolescents struggle socially, and online communities are vital. For these students, the need for friendship, the need to belong, is greater than the risk of being bullied.

"In middle school, kids don't get a chance to know who you really are. They are lost in the crowd," Aftab said. "There's a need, and social networking sites are important."

But "social networking," too often, can turn into antisocial bullying. In Bullying and Harassment, A Legal Guide for Educators, author Kathleen Conn writes, "because cyberbullies do not have to confront their victims directly, they may feel emboldened and uninhibited, making their messages more vicious than they would be in a personal confrontation."

Experts like Nancy Willard, the director of the Center for Safe and Responsible Internet Use, say schools can do more to curb cyberbullying. Schools are slow to catch on to cyberbullying activities on- and off-campus. With administrators concerned about violating First Amendment rights, and parents foggy on the particulars, cyberbullies have free rein.

"We need a comprehensive framework for school districts to respond [to cyberbullying]," Willard said. "I believe it is occurring through the district Internet systems. Schools think they have it under control through Internet filtering, but there's a lot more the school can do."

Last May, during a blustery cold snap in the nation's capital, dozens of tweens and teens accompanied by parents and chaperons, attended the fifth annual Wired Safety.org Summit. The daylong event was sponsored by Wired Safety.org, one of the largest nonprofit online child safety organizations in the country.

Middle-school students, in matching crisp white polo shirts, convened in a stately hall on the third floor of the Russell Senate Office Building.

The summit honored Teen Angels, 13- to 18-year-old volunteers trained by the FBI, local law enforcement and other experts in all aspects of online safety, privacy and security. Younger kids, or Tween Angels, are prepped for future roles as Teen Angels. Founded and run by Parry Aftab, Teen Angels run programs educating younger kids, teachers and parents about responsible Internet use.

The summit was a chance for Wired Safety.org to tout its influence in the cyber community and a chance for the kids to show off their extensive knowledge. The teen panelists and their guests discussed the dangers of music piracy, hacking and sexual predators. And, on an extremely serious note, they discussed how cyberbullying can lead to felony charges.

That same afternoon, not 10 miles away, an Arlington, Va., school was under lockdown for a cyber crime.

Three Washington-Lee High School students had received instant messages the night before threatening to harm them and others at the school. Computer forensics experts were called in, along with police who eventually arrested the 13-year-old brother of one of the victims. He was arraigned on felony and misdemeanor charges.

And just a week before, in the same county, Yorktown High School was evacuated by police after a 15-year-old boy sent a threatening instant message to another student. The teen turned himself in and faced a felony charge of making a written threat to kill.

Authorities in Arlington County aren't the only ones taking Internet threats seriously. Psychologists are, too. According to the American Psychological Association bullies are more prone to other forms of antisocial behavior such as vandalism, fighting and shoplifting. The APA estimates that one in four boys who bully will have a criminal record by age 30.

For victims, it can be even worse.

Deborah Finlay, a guidance director at Western Branch Middle School in Chesapeake, Va., said she began to understand cyberbullying only after a student "was pushed over the edge," committing suicide in 2004. Her goal is to raise awareness about the dangers of the Internet, one child at a time.

Finlay points out that many students have two blogs -- "a nice one, and a bad one."

"The way I deal with it is to find kids' blogs online and alert the parents," Finlay said. "I'll call and say, 'I would like Susy to show you her blog.'"

Said Finlay of such students, "They're sophisticated with technology but socially immature."

"Sticks and stones may break my bones, but words will never hurt me."

A click of the mouse, and suddenly a whole new world appeared before me, bright and brilliant and exciting, displayed on my computer screen. When I was 9 years old, my sister set me up my very own AOL Instant Messenger account so I could chat along with my friends from the privacy of my own home.

Beginning to explore the possibilities of the Internet was fun for me. I was thrilled with the idea that I now had access to all aspects of the Internet. The promising new window the Internet opened up for me seemed too good to be true, and, in fact, it was.

On one particular day, I was home alone, instant messaging my friends on my shared computer. An alert popped up on the screen, asking me if I would like to receive a message from a screen name that I didn't recognize. Assuming that it was one of my friends who had changed her screen name or something, I clicked to accept it. The message surprised me.

Several curses appeared on the screen. Confused and slightly worried, I typed the question "Who are you?" The reply was more offensive comments against me. I asked the person to stop talking to me, becoming more concerned, and it was then that the person chose to send seven words that chilled me: "Hold on. I'm coming to kill you."

The person signed off as if they were leaving somewhere, and I became increasingly afraid. I had no idea who this person was, if they lived across the street from me or in a different country. In my 9-year-old mind, I was convinced someone was coming to hurt me.

Being home alone, I ran downstairs to lock both doors tight. Then I hurried upstairs to hide in my room until my mom came home.

Afterward, I didn't tell anyone for a long time. I was convinced that I had done something wrong by clicking to accept that message. If I told I thought my parents would assume that the Internet wasn't safe and take away not only my computer privileges, but also take away my older siblings' privileges. It remained a secret, keeping me off the computer in fear.

Not every cyberbullying instance is necessarily a death threat. I also have firsthand experience of simple teasing: people posting negative comments about me on their social networking websites or in their buddy profiles. No matter which form it takes, it still hurts the same way. Reading it on the computer screen makes it no less if not more effective than someone saying the words straight to your face.

I felt awful about the things other kids said to me, and that anyone would want to hurt me so badly. In some ways, I think sticks and stones would be much easier to bear.