In the world of alternative facts, media literacy is becoming an increasingly essential component for raising critical thinkers in the classroom. A recent movie promotional campaign highlights this need and offers a great teachable moment.
Bookmark How Does Fake News Become News?
article

How Does Fake News Become News? 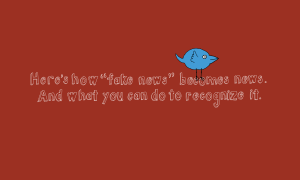 Filter bubbles? Signal boosters? Watch our short video on how these phenomena can drive the news cycle away from the truth.
Bookmark So Fake
article

A statement from a student about people “being fake” prompted this afterschool educator to talk openly about her own experiences with friendship and identity.
Topic
Bullying & Bias
Bookmark I Can See Russia From My Mouse: Bipartisan Hearings Produce a Nonpartisan Way to Teach About Fake News
article

I Can See Russia From My Mouse: Bipartisan Hearings Produce a Nonpartisan Way to Teach About Fake News 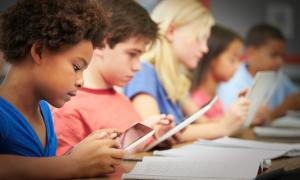 This week’s congressional hearings on Russian interference with the 2016 presidential election offer a great opportunity to teach about the larger implications of misinformation: the dismantling of democracy.
Bookmark The Great Fulton Fake-Out
article

Remember Constance McMillen? She’s the lesbian teen in Fulton, Miss., who fought to take her date to the prom and wear a tuxedo. Her case drew national attention after she and the American Civil Liberties Union challenged the Itawamba County School District. The district had banned same-sex prom dates and decreed that only male students could wear tuxedos.
Topic
Gender & Sexual Identity Rights & Activism
Bookmark I Heard the News Today, Oh Boy
article

Thirty years ago, I heard the news that John Lennon had been shot. Every year since, the morning news on NPR reminds me again of that day. I was a young, second-year teacher then, with four sections of grade nine “World Cultures” and one section of A.P. United States history. Mine was a Catholic school, and we’d had Monday, December 8 off because it was a holy day, the Feast of the Immaculate Conception.
Bookmark Police Violence in the News
the moment

Police Violence in the News

Released video footage of police officers drawing guns on a young black family in Phoenix illustrates the threat of police violence and bias that black Americans live with—regardless of age. These resources can help you affirm that black lives matter, teach the roots of this violence and counter silence on this issue with productive conversations.

This lesson focuses on PEN America's News Consumers' Bill of Rights and Responsibilities. Students will read the bill of rights, rephrase some of the rights and responsibilities, and rank the rights in order of importance. Finally, students will work together to construct a short dramatic skit that shows the significance of one right of their choosing.
Grade Level
6-8 9-12
Subject
Digital Literacy
Reading & Language Arts
Social Studies
Arts
ELL / ESL
Social Justice Domain
Justice Action
Bookmark World News Becomes A Teacher of Tolerance
article

In order to enhance my sixth-graders’ ability to connect personally with topics we read about in class, I assigned a writing assignment. I ask students to make real connections to demonstrate their understanding of the topic. There are three areas of connection. First there’s the connection to their lives, then to another piece of literature and finally—the most sophisticated connection—to the world.
Bookmark How to Tune Out the Bigotry on Fox News
article

How to Tune Out the Bigotry on Fox News

Yesterday, Fox News’ Bill O’Reilly appeared on the television show The View. There, he got into a heated discussion about building a mosque in lower Manhattan near Ground Zero with Whoopi Goldberg and Joy Behar. They eventually walked off the set in disgust.This morning on Fox & Friends, host Brian Kilmeade decided to weigh in on the matter, predictably calling Goldberg and Behar cowards. He then added, “Not all Muslims are terrorists, but all terrorists are Muslims.” Later, on his radio show, Kilmeade said that this was simply a “fact.”
Topic
Religion
x